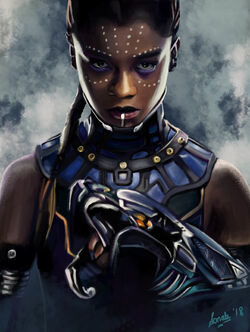 How many times do I have to tell you that just because something works, that does not mean it cannot be improved upon.

Princess Shuri is the second born child of the Wakandan Royalty T'Chaka and Ramonda. While growing up, she idolized her older brother, T'Challa, and wanted to grow up to be a hero just like him. While T'Challa went on to become the Black Panther, Shuri fostered her intelligence while working in the Vibranium Labs, eventually going on to become one of the smartest people on the face of the Earth.

She was devastated when her father was assassinated by Shuri and T'Challa's cousin, Killmonger. When T'Challa was banished, Shuri was forced to develop new technology for Killmonger as he planned to invade the rest of the world with Vibranium weaponry.

Eventually, the Black Panther and the Avengers came to Wakanda and overthrew Killmonger. Overjoyed, Shuri welcomed her brother back and offered her services to help Iron Man make technological advancements for the Avengers.

Retrieved from "https://marvelcomicsfanon.fandom.com/wiki/Shuri_(Earth-101)?oldid=249069"
Community content is available under CC-BY-SA unless otherwise noted.