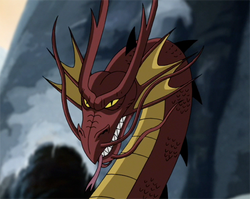 No Hair, (as a dragon, he has scales)
Unusual Features
Dragon-shaped crest on his chest
Status
Citizenship

Shou-Lao was an immortal dragon who became the source of the power of K'un-Lun. During a performance of the dragon riders of K'un-Lun for the entertainment of its Yu-Ti, Shou-Lao went berserk and attacked the city's leader. He was slain by Quan-St'ar, who cut out the dragon's heart. Enraged at this, Yu-Ti banished Quan-St'ar from the city and revived the dragon by melting its heart and placing it in a sacred cavern.

From this moment, each Iron Fist had to accomplish the final test of defeating this dragon in order to absorb part of its power. He was reborn over 66 times.

Danny Rand defeated the dragon, and in the course of the battle had the dragon-shaped tattoo burned on his chest. After defeating Shou-Lao he plunged his hands into the brazier containing the dragon's immortal heart and it charged him with the power of the Iron Fist. However, since he wasn't old enough, he had to go back to K'un-Lun as soon as he turned 18 to fight the dragon again and rightfully claim his title.

Shou-Lao had the ability to breathe fire. Also, he could strike at lightning fast speeds.

Retrieved from "https://marvelcomicsfanon.fandom.com/wiki/Shou-Lao_(Earth-1010)?oldid=181368"
Community content is available under CC-BY-SA unless otherwise noted.