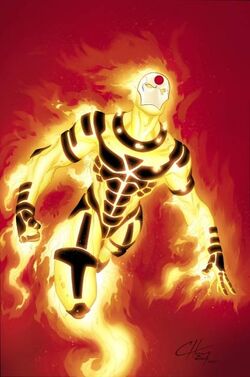 You're about to find out what it feels like to walk on the sun. I wouldn't worry about the pain... you won't survive the experience long enough to feel it.

Shiro Yoshida is the oldest of three children in his family. He always felt responsible for his siblings, which led to him feeling robbed of living his own life. When his mutant powers manifested and he was approached by Magneto with the offer to join his clan of mutants, he adamantly accepted.

Shiro abandoned his family and adopted the name Sunfire, becoming one of the first members of the Brotherhood of Mutants, alongside Mystique, Mastermind, Destiny, Emma Frost, Thunderbird, and Blob. He finally felt like he'd found his place in life and became violently dedicated to Magneto's cause, even fighting against the X-Force on multiple occasions.

When the Brotherhood set up shop on the island of Genosha, Sunfire attempted to reach out to his siblings after hearing word that his brother, Kenji, developed mutant powers of his own. However, he had gone off the grid, and his sister, Mariko, had become ashamed of him, and refused to accompany him to Genosha. Sunfire was saddened by this, but refused to let it shake his devotion to the mutant cause. Unfortunately, not long after Genosha went public and began accepting mutant refugees, the Sentinel program was reinstated, and a fleet of them was deployed to rain down on Genosha. Sunfire was one of the first to oppose them, and one of the first to fall, his body being blasted into smithereens and splashing down into the ocean.

Retrieved from "https://marvelcomicsfanon.fandom.com/wiki/Shiro_Yoshida_(Earth-101)?oldid=250427"
Community content is available under CC-BY-SA unless otherwise noted.