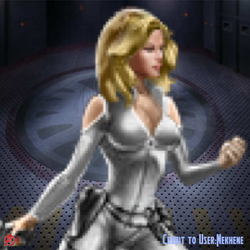 Sharon Carter was assigned by Nick Fury to protect and monitor Steve Rogers in his home apartment and was given the apartment opposite to his, acting as a nurse going by the name Kate. She would report back to Fury to ensure that Rogers was not a threat to S.H.I.E.L.D. and could be trusted. Over her tenure as his protector, Carter became well acquainted with Rogers, and would talk to him whenever they met, often flirting with Rogers in order to gain his trust.

One day, Sharon Carter met Steve Rogers outside their respective apartments; after a brief chat, Rogers shyly asked Carter if she wished to join him for coffee, which she politely refused, noting she had to do her laundry. Before she left, Carter informed Rogers that he seemed to have left his radio on as it was still playing music. When Nick Fury was attacked by the Winter Soldier in Rogers' apartment, Carter burst in to aid Rogers, informing him that she was a member of the S.H.I.E.L.D. special service and had been assigned by Fury to protect him. She stayed with Fury providing medical attention while Rogers attempted to apprehend the attacker.

When Fury was declared dead after surgery failed to save him, Carter met with Secretary Alexander Pierce inside the Triskelion, who questioned her about the incident and comforted her saying that she had done everything she could have done to save the Director. As she exited Pierce's office, she passed Rogers who was also on his way to meet with Pierce; as they passed Rogers nodded to her and sarcastically called her "neighbour".

With all due respect, If S.H.I.E.L.D. is conducting a manhunt for Captain America, we deserve to know why."
"Because he lied to us.

When Jasper Sitwell ordered all S.H.I.E.L.D. agents to join the manhunt for Captain America after he escaped the Triskelion, Carter questioned his orders, demanding that if they were going to hunt down Captain America, they should learn why. However, Alexander Pierce arrived and told the staff that Rogers was withholding information from S.H.I.E.L.D. making him a threat.

Move away from your station!"
"Like he said, Captain's orders."
"You picked the wrong side agent."
"Depends on where you're standing.

Carter was working in the central control room for Project Insight when Captain America revealed the infiltration of HYDRA. Brock Rumlow and STRIKE walked into the control room and Rumlow threatened to kill Tanner Evans, the agent in charge of the launch, unless he began the launch sequence immediately. Evans refused, saying that he would not put the Helicarriers in the air. Rumlow ordered him to step away from his station but Carter then intervened. She pointed her gun at him telling him to stand down; as she did this, the other loyal S.H.I.E.L.D. agents in the room pointed their guns at STRIKE and a gunfight broke out. Rumlow, despite Carter's best efforts, managed to put the Helicarriers in the air.

Working for the CIA

With S.H.I.E.L.D. having been dismantled after the events of the HYDRA Uprising, Sharon Carter was left without employment. Seeking to still have a job which involved helping people, she joined the CIA as an agent given the skills she possessed as a spy. To prove herself as an expert marksman as well, she took part in a shooting range, scoring top marks with minimal effort.

Retrieved from "https://marvelcomicsfanon.fandom.com/wiki/Sharon_Carter_(Earth-1010)?oldid=124336"
Community content is available under CC-BY-SA unless otherwise noted.