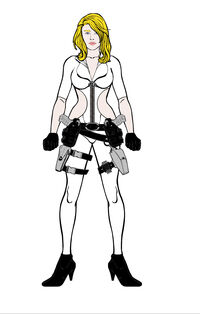 The Super-Soldier Serum metabolized and enhanced all of James Barnes and Margaret Carter's bodily functions to the peak of human potential. Dr. Reinstein described this potential as being "the next step in human evolution", while still remaining completely human. The two passed on this physical enhancement in full force to their son, Steven Barnes. Then Steven Barnes, who married a normal woman, only passed on partial enhancements to his daughter, Sharon. Therefore, Sharon is automatically at peak human physical perfection.

Retrieved from "https://marvelcomicsfanon.fandom.com/wiki/Sharon_Barnes_(Earth-515)?oldid=50006"
Community content is available under CC-BY-SA unless otherwise noted.