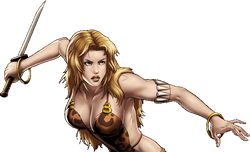 Shanna O'Hara or Shanna the She-Devil was the daughter Gerald O'Hara a Diamond miner living and working in Africa. Shanna O’Hara was born in Zaire, Africa, and spent most of her youth playing in the jungles. When she was only six, Gerald O'Hara went to kill a leopard that had gone rogue which used to belong to Patricia O’Hara, her mother. While hunting the animal, Shanna's father accidentally shot and killed her mother. This was the event that started Shanna's lifelong crusade against guns and other firearms. After the incident, Shanna moved to the United States of America to live with some relatives. Shanna studied to be a Vet at University and also became an accomplished Olympic athlete, specializing in track and field and competitive swimming.

After University Shanna was offered a zoologist job placement at Central Park Municipal Zoo in New York City. While at the Zoo Shanna raised a female leopard she named Julani. One day another traumatic incident occurred when Julani was shot and killed by a zoo guard. The next day the Zoo’s Director asked Shanna to take Julani's cubs, Ina and Biri to the Dahomey Reserve in Africa. Shanna decided to stay with the animals and, wearing Julani's pelt as an honor, became Shanna, the She-Devil. The animals were tragically killed when the sorcerer Raga-Shah transferred their life forces into the blood beast Ghamola that Shanna was forced to destroy.

Shanna was kidnapped by the red sorcerer Malgato, to be used as a human sacrifice alongside Ka-Zar. She eventually fell in love with Ka-Zar and remained in the Savage Land with him.

Shanna was resurrected using the life force of the Savage Land, and thus is tied to the land itself. As long as the Savage Land lives, so will Shanna. She also instinctively knows the languages and history of the Savage Land and its people. Shanna also now possesses the strength of ten men. She was able to run 52 miles per hour over uneven terrain.

Shanna is an Olympic-class athlete with extraordinary agility. Her hunting, foraging, healing, & fighting skills are at the limits of human capacity. She is a trained veterinarian and is highly skilled with wild animals.

The strength of "ten men";

Equipment: None known.
Transportation: None known.
Weapons: Shanna uses primitive weapons such as knives, spears, and bows and arrows.

Retrieved from "https://marvelcomicsfanon.fandom.com/wiki/Shanna_O%27Hara_(Earth-1010)?oldid=100037"
Community content is available under CC-BY-SA unless otherwise noted.