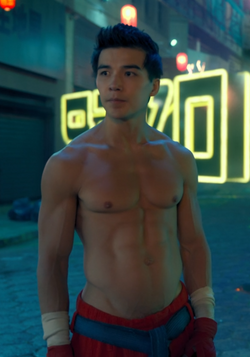 The Master of Kung Fu
Identity

Only 20 guys? Come on, at least give me a challenge.

Shang-Chi was raised by his father, who was a dedicated member of the Ten Rings. Shang was roped into the organization from a young age, and showed a fiery spirit that impressed the Mandarin. He enlisted Shang as his protege and began to train him in the art of combat.

He was a quick study, and became one of the deadliest fighters the Mandarin had ever seen. When the Mandarin began sending Shang on combat missions to topple enemy organizations, he became disillusioned with the chaos the Ten Rings bring with them.

Shang faked his death on a mission gone wrong and went underground. Wishing to hone his skills on a more spiritual level, he started traveling the world to seek out any masters of combat he could find. He even briefly studied at K'un-Lun, but has since returned to China with the sole intention of bringing down the Ten Rings.

After the Mandarin came into possession of all Ten Makluan Rings, Shang-Chi believed he had failed. However, he discovered the Avengers were mounting an offensive strike against the Mandarin, led by Iron Man. Shang-Chi went to help them, and played a crucial role in fighting off the Mandarin to the point where he became overwhelmed by his own power. With the Ten Rings crippled, Shang-Chi felt lost and alone, having no idea where to go from there. However, Iron Man and Captain America were impressed by his resolve and his abilities, and proceeded to offer him a spot on the Avengers, which he accepted.

Retrieved from "https://marvelcomicsfanon.fandom.com/wiki/Shang-Chi_(Earth-101)?oldid=249269"
Community content is available under CC-BY-SA unless otherwise noted.