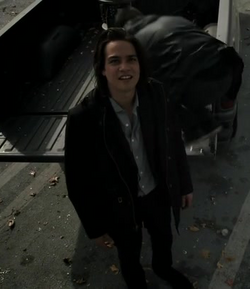 Seth Dormer was a student at S.H.I.E.L.D. Academy's Science Division. At some point, he was contacted by Ian Quinn of Quinn Worldwide to develop a weapon for him in secret where it was revealed that Seth's father works as a lawyer at Quinn Worldwide. Seth recruited fellow student Donnie Gill to help him do this. The two students built a machine that could instantly freeze any surrounding water. After testing the device in a pool, where Seth purposefully let himself get stuck in the ice to make himself look innocent in the matter, Agent Anne Weaver called for her former students Leo Fitz and Jemma Simmons to return to the academy to investigate. Eventually, Dormer and Gill's actions were discovered, and the two fled the academy for Quinn to pick them up. However, their benefactor had cut them off, but not before telling the two to test their new machine on the academy itself. Gill and Dormer activated the device, inadvertently creating a super-storm. Although Donnie was rescued in time, Seth died in the storm when the lightning that struck the machine put Seth into cardiac arrest that Simmons was unable to get him out of.

Retrieved from "https://marvelcomicsfanon.fandom.com/wiki/Seth_Dormer_(Earth-1010)?oldid=107844"
Community content is available under CC-BY-SA unless otherwise noted.