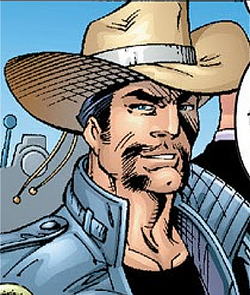 Married
Occupation
Reality show host/hunter (formerly)
Justice vigilante (currently)
Education
College-educated
Origin
Origin
A human mutate. Formerly a host of a wildlife show in Australia, Sergio leaves the show business and moved to New York City. He turns to vigilantism after discovering that his adoptive father was murdered by the Mafia and genetically alters his DNA with a serum similar to the Super Soldier serum, giving him strength and agility resembling a wild animal in the jungles.
Place of Birth
Melbourne, Victoria, Australia
Creators

Those who hunt the innocent become the hunted

Sergio Reinhardt Hasselmann was born in Melbourne, Victoria, Australia. His biological parents disappeared when he was only a newborn and he was taken under the care of John "Jackal" Cook, a famous zoologist, conservationist and wildlife expert who was famous almost all over Australia. During his youth, Sergio has been exposed to the horizons of wildlife as Jackal would take him all over the world and watch him care for different animals where they are healthy or sick and even hunt down bigger predators to examine them and their lifecycle. This inspired Sergio and he gained a deep love for animals as he grew up, following in his adoptive father's footsteps.

Birth of Kraven the Hunter

By the time Sergio has gotten older, he was starred in his own wildlife reality series, The Jungle Hunter under his stage name Sergio Kravinoff where he was focused hunting down dangerous animals and discover different wildlife all over the world. This brought Sergio into fame as he became a household name and was featured all over the news and entertainment media, gaining a lot of fans where ever he went. This also gained him the nickname, Kraven the Hunter by his fans and Sergio went on with his new name as he continued on with his career.

However, Sergio's show came to an end after he decided to leave the show business and he moves to New York City with his father where he gained a job as a zookeeper at the Central Park Zoo where he continued his passion of working with the animals. He soon gained popularity once again when people recognized him and he began to put on shows for the audience which he found himself more comfortable than being on television and feeling more at home like he was when he lived in Australia.

However, Sergio soon discovers that Jackal has been involved with the mafia by selling illegal firearms and drugs to other black marketers and crime organizations like the Russian mafia and the Japanese Yakuza. The reason is that he was in need of money and that Sergio's job working at the zoo wasn't paying enough bills to put food on the table and keeping them from getting evicted from their home and he had been doing it behind his back since they first moved to America and kept it from him for his sake. This left Sergio very heartbroken and enraged over his father's transgressions and he storms out of his home while the older man looked away in shame. After spending overnight at a hotel to cool his head off, Sergio returns home to face his father but when he had gotten home, his house was completely trashed and he finds his father laying lifeless and in a pool of blood.

Devastated and filled with rage, Sergio goes off to find his father's killers which happened to be members of the mafia. As he confronted them, he was told that Jackal chose to cut ties with them because of what happened with him and Sergio. After laughing and taunting on how weak and defenseless Jackal was before they killed him, Sergio goes on a rage and fights the mafia. But he was beaten to a pulp and left for dead by the gangsters. But Sergio was found by a man named Dr. Curt Connors and was taken in by him. After Sergio breaks down in sorrow that his father had been murdered by the mafia for wanting to provide a better life, Dr. Connors told him that he could help him avenge his father's death. Connors introduced Sergio to a special serum that would help him enhance his body, making him similar to Captain America. Not willing to miss the chance in bringing the mafia to their knees, Sergio lets Dr. Connors inject the serum into him, which altered his entire DNA, giving him abilities that resemble a wild animal.

After serious training with the aid of Dr. Connors, Sergio goes on the road to vigilantism and beats down the mafia who murdered his father before the police arrived and arrested the men for Jackal's murder. His appearance was caught on the news and it shocked a lot of people to see what has happened with him. Since that day, Sergio turned his focus on hunting down criminals who terrorize other innocent people. Remembering what his father did for both of them, he blamed himself for letting him die and he promised himself that he will never let it happen anyone else again. Since that promise, Sergio named himself simply Kraven and began his career as a vigilante protecting the weak from criminals and even superpowered villains.

Sergio met college student Peter Parker aka Spider-Man after saving him from a raging tiger that escaped while he was on a date with then-girlfriend, Mary Jane Watson. They started off as a mutual friendship, but Sergio becomes smitten over the web-slinger and eventually finds out about his secret identity, always coming to Spider-Man's aid whenever he is caught in a bind with any criminal he faced such as Scorpion, Electro, or the Rhino.

Sergio eventually encounters Peter once again, who later had a fight with Mary Jane over his career as Spider-Man and how it's putting a wedge on their relationship, causing him to storm off. Seeing the hurt from the web-slinger, Sergio comforts him which eventually has him and Peter having sex. After their night together, Sergio tells Peter that he has fallen love with him, earning a response from the webbed hero that he and Mary Jane has officially broken up and remained as friends despite not telling her about the affair. The two eventually become lovers and they later get married through elopement.

Retrieved from "https://marvelcomicsfanon.fandom.com/wiki/Sergio_Kravinoff_(Earth-7095)?oldid=257152"
Community content is available under CC-BY-SA unless otherwise noted.