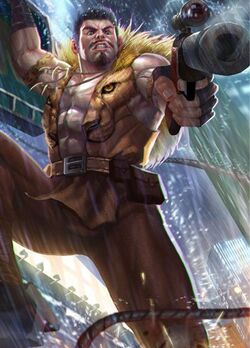 The Hunter, Sergei Kravin, The Spider, Scarlet Spider, Grim Hunter, King of Lions, Emperor of the Wild, The Unhuntable Sergei, The Beast
Identity

Black
Unusual Features
Tattoos; when he genetically tampered with his DNA, he became a gruesome werewolf-like monster
Status
Citizenship

Sergei Nikolaevich Kravinoff was born and raised in Volgograd, Russia. Born into a strict and conservative aristocrat family, also known as the notorious "Kraven the Hunter", Sergei became one of the world's greatest hunters to fulfill his sense of lost nobility and further exceed his and his own family's reputation, something that was almost forgotten in his hometown. Growing up, Kravinoff conveniently found out that he had a great talent after finding employment in Kenya, Africa. Kravinoff began his career using the typical tools of a hunter but over time he developed a preference to take down large animals with his bare hands. In summary of what his early adulthood was, Sergei spent most of his life travelling across the world, feeding his passions for travel, adventure, and the thrill of the hunt, not just hunting animals, but also hunting people whom he deemed were a threat to his family and his home. He even had a pet lion named Gulyadkin as his partner in hunting before its timely death.

Along the way of his journey as the merciless Hunter, his lost him his wife, Sasha, after the latter left him for believing that Kraven chose to cherish his career more than their love and marriage, thus he would eventually also lose his interest and passion to hunting in doing so. Kraven took a hiatus for the next several years, until he eventually moved in upper Manhattan, New York City as he owned and lived in a mansion that was once a property to some of his now deceased ancestors who previously emigrated to the United States for a better chance at life.

Since discovering the masked vigilante and superhero of New York City known as Spider-Man at some point during the late 1990s, Sergei's hunter instincts has resurfaced for the first time in years, with Sergei finally accepting the title of Kraven the Hunter once more, now intended to hunt the web-slinging hero in action in order to expose himself to the public, knowing that his actions would gain the attention of those who may be interested in hiring him as a "hunter", to which he truly meant was a mercenary once again.

Unable to best the wall-crawler on his own, Kraven sought strength in numbers. Early in his career as a ruthless mercenary, he and five other members of Spider-Man's rogues gallery united under the leadership of both Norman Osborn (the Green Goblin) and Otto Octavius (Doctor Octopus). The original incarnation of the Sinister Seven also included the earth-shifty Sandman, the illusion-casting Mysterio, the high-flying raptor Vulture, and the electrifying Electro. The superhuman criminals' master plan was simply to pummel the wall-crawler one by one until one of them would manage to weaken him, before eventually killing him with their own arsenal in order for it to be "fair," as Octavius has honestly reassured to them that they would all get their chances to torture Spider-Man as they sadistically and morbidly please.

At some point later in time, Kraven willingly genetically tampered with his DNA, courtesy of geneticists from Oscorp ordered by Osborn himself, allowing him to become a gruesome werewolf-like monster in an attempt to get revenge on Spider-Man and try to revive and improve his reputation as a hunter for years. To Kraven, this decision was a deemed necessary act he made in order to "catch up" with the modern world, which was a strange, unfamiliar, and far too complicated age that was filled now with superhumans, both heroes and villains.

Artificially Enhanced Physiology: Originally just a trained athlete and hunter, Kraven had decided to undergo genetic enhancements to gain some superpowers during Ultimate War in order to combat an insurmountable amount of enemy superhuman forces, especially the heroic Ultimate Alliance. As a result of Kraven's decision, his physiology permanently underwent several changes endowing him with superhuman physical attributes.

Retrieved from "https://marvelcomicsfanon.fandom.com/wiki/Sergei_Kravinoff_(Earth-61615)?oldid=237614"
Community content is available under CC-BY-SA unless otherwise noted.