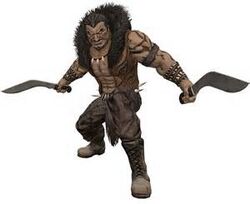 Little is known about Kraven's life before the Secret Invasion. It can be assumed to be similar to his mainstream counterpart, as he and the Vulture mentioned they were members of the original Sinister Six.

Kraven (hired by the Taskmaster) was part of a raid an an abandoned A.I.M. base repurposed by the Skrulls. Other superhumans who participated were Captain America, Taskmaster, Spider-Man, the Rhino, Sandman, Cable, Penance, and Vulture.

Retrieved from "https://marvelcomicsfanon.fandom.com/wiki/Sergei_Kravinoff_(Earth-6109.2)?oldid=128922"
Community content is available under CC-BY-SA unless otherwise noted.