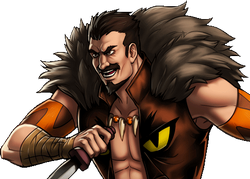 Sergei Kravinoff is a Russian games keeper living and working in Africa. Kravinoff is the most skilled hunter in the known world, normally dressed in a lion-themed vest when hunting and relying only on his natural skills to catch his prey.

Kravinoff arrives in New York with Calypso and his pet lion to track down Spider Man. Kravinoff meets Spider-Man where he provides a reasonable challenge but is still subdued before too long. Kravinoff after his defeated is convinced that he lost because of Spider-Man's genetically altered physiology.

Kravinoff is brought to OsCorp by Osborn himself for greater purposes, not aware they know about his Kraven the Hunter identity.

Experienced Combatant: Kraven is a master of many armed and unarmed forms of combat and his skill is great enough to beat Spider-Man in one-on-one combat. He is also a expert knife fighter. His fighting style is very savage in nature and Kraven has developed a unique fighting style by fighting wild and vicious animals with his bare hands. His fighting skills are often enough to defeat Spider-Man in combat, a being with far greater strength than Kraven.


Weapon Specialist: He masters the usage of most melee weapons such as swords, axes, staves and spears. However due to his hunting experience he is also skilled with ranged weaponry and has a remarkable skill with rifles and blow darts.


Expert Marksman: Kraven used all sorts of ranged weaponry during his life and as a result he possesses great accuracy and skill with guns and throwing weapons and also blow darts. He rarely misses his target.


Master Tactician and Strategist: Kraven was a brilliant tactical mind and often deploys elaborate traps to surprise his foes. He makes excellent use of his taming skills by incorporating deadly predators into his schemes. Kraven's observatory skills are top-notch and he can patiently wait for hours just to find the perfect moment to strike. His plots allowed him to outsmart and kidnap the likes of Spider-Man.


Master Hunter and Tracker: Kraven was and still is one of Earth's best hunters. He possesses astonishing tracking abilities and is even able to track Spider-Man across rooftops, furthermore he can pickup his prey's trail from meager details in the area. He also has vast hunting experience, knowing many special hunting methods and animal specific habits. He also developed techniques to track and hunt superpowered individuals like Spider-Man without their notice.


Master Animal Tamer: Kraven can subdue and train almost any animal. Animals he trained show fearless loyalty to Kraven and follow his orders almost perfectly. He is able to train two animals and then command them in unison and with flawless synchronization. Due to this skill most people think he uses some sort of mind control.

Minor Occult Knowledge: During Kraven's travel throughout the world, he came into contact with numerous tribes and civilizations. Thus he witnessed many of their rituals and has minor skills in there performance.

Retrieved from "https://marvelcomicsfanon.fandom.com/wiki/Sergei_Kravinoff_(Earth-1010)?oldid=112759"
Community content is available under CC-BY-SA unless otherwise noted.