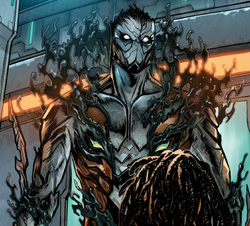 Your abilities are no match... for ours.

Always a skilled hunter, Sergei Kravinoff always wanted to move on to the next deadliest prey. Eventually, this became the vigilante Spider-Man, who Kraven was hired to assassinate by the Kingpin.

After failing to kill him the first time, Kraven became obsessed. He even went so far as to let Oscorp experiment on him by enhancing his genetics with mutated feline DNA. Over time, he began formulating a plan to bond himself with the Venom Symbiote so that he would finally have the edge over Spider-Man.

The only problem was that the Symbiote was already bonded to Eddie Brock. His focus then shifted to besting Venom, which he was eventually able to accomplish by ambushing him while he was in battle with Spider-Man and exploiting his weakness to fire. After driving a spear through Brock's chest, Kraven bonded to the Symbiote and beat Spider-Man nearly to death.

After feeling the power that the Symbiote gave him, Kraven's ambitions grew beyond Spider-Man. He turned his focus to Wakanda, and snuck in, attempting to steal Vibranium to sell on the black market. However, unbeknownst to him, Wakanda was harboring Cull Obsidian, a member of the Black Order, as a prisoner. The Guardians of the Galaxy were staging an assault to assassinate him, because he was destined to bond to the Venom Symbiote through the Prophecy of Infinity. Kraven ended up locked in battle with the Guardians until being separated from the Symbiote by Star-Lord's sonic gun, which resulted in him being decapitated by Gamora. While the Symbiote then launched itself towards Cull Obsidian, it was intercepted by Groot.

Retrieved from "https://marvelcomicsfanon.fandom.com/wiki/Sergei_Kravinoff_(Earth-101)?oldid=250290"
Community content is available under CC-BY-SA unless otherwise noted.