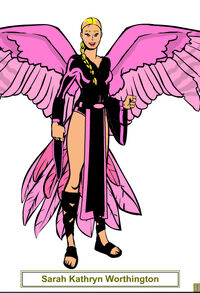 Sarah is the child of both Angel and Dazzler.

Seraphim possesses the superhuman ability to fly by means of his natural wings, which span 16 feet sixteen feet from wingtip to wingtip. Fully feathered like a bird's, the wings have a very flexible skeletal structure, enabling her to press them to the back of her torso and legs with only the slightest bulge visible under his clothing. Seraphim flies by flapping her wings, as a bird does. Her wings are somewhat smaller than her father's wings.

Seraphim's entire anatomy is naturally adapted to flying. Her bones are hollow like a birds, making her weigh far less than usual for a woman of her build. Her body is virtually devoid of fat and possesses greater proportionate muscle mass than an ordinary human does. Her eyes are specially adapted to withstand high-speed winds which would hurt the average human eye. She possesses a special membrane in her respiratory system enabling her to extract oxygen from the air at high velocities or altitudes.

Due to her body's natural mutation, the Seraphim possesses greater physical strength than an ordinary human equal to her in body weight and can lift about 400 lbs.

The Seraphim's musculature produces less fatigue toxins during physical activity than the musculature of an ordinary human. She can physically exert herself at peak capacity for several hours before the build up of fatigue toxins in her blood begins to impair her. Her physical stamina while in flight is considerably greater. The Seraphim can fly non-stop under her own power for a maximum of approximately twelve hours.

The tissues of Sarah's body are somewhat harder and more durable than that of an ordinary human, though she is far from invulnerable. While she can be injured in ways comparable to an ordinary human, her body is structured to withstand the friction caused by flying at high speeds. She can also withstand impact forces that would severely injure or kill an ordinary human with only mild to moderate discomfort.

Sarah possesses an accelerated healing factor that enables her to repair damaged tissue with much greater speed and efficiency than an ordinary human. She can completely recover from non-fatal injuries such as slash and punctures within a matter of minutes and injuries as severe as broken bones within a few hours.

The Seraphim's normal cruising speed averages around 70 miles per hour (112 kph), though she is capable of diving swoops that reach up to 180 miles per hour (290 kph). She can fly at 150 miles per hour (240 kph) without the help of a tail wind for up to half an hour at a time before tiring to an appreciable degree. Though she generally flies beneath the height of the clouds ([6,500 feet) (1981 meters) she can reach a height of 10,000 feet (3000 meters) with little effort. With severe strain she can attain the highest recorded altitude of a bird in flight (African geese at 29,000 feet (8840 meters) above sea level), but she could only remain that high for several minutes.

Seraphim possesses a body-wide energy field that controls the energy levels of the outer electron shells of her body in such a way as to cause the cascaded release of photons. In effect, this field is lasing, with the apparent efficiency of a laser (99.9%). The released energy is far greater than the incoming kinetic energy and therefore must involve an outside energy source, the nature of which is unguessable. Left undirected, the Seraphim’s light will radiate from her body in all directions, producing regular flashes of white light (white light is a mixture of all portions of the visible spectrum). By conscious control over the light she produces, she can control its direction, frequency (color), amplitude (intensity), and duration. Apparently she must consciously or subconsciously will the light to leave her body. Otherwise, light would “leak” from her at all times, even when she is asleep or unconscious. She can produce numerous effects with the light she manipulates. She can simply cause a bright glow all about her body. She can create very simple patterns out of rays of light like circles, squares, triangles, and stars. She can create a pulse of light on the order of several thousand watts seconds of power, which temporarily blinds people with its brilliance. She can create a chaotic cascade of sparkling lights and colors that severely upsets other people’s equilibrium, or a pulsating strobe-light effect. Her favorite uses for her powers are lasers, destructive force fields, and holograms, which she is especially good at.

Her body, especially her eyes, shields itself against any injurious effects of her light transducing abilities, and against those of bright lights in general.

Presently afflicted with a mysterious resurrection factor which prevents her from being killed by conventional methods.

Can speed up others' body's ability to regenerate through a light she emits from her hands pointed towards someone's injuries. If someone is dead, then she is not able to heal them. The worse an injury is than the more energy it takes for her to heal someone's wounds.

Peak human level for a woman.

Retrieved from "https://marvelcomicsfanon.fandom.com/wiki/Seraphim_(Earth-1992)?oldid=87293"
Community content is available under CC-BY-SA unless otherwise noted.