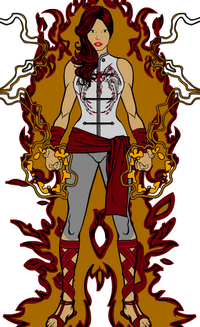 Single
Occupation
Student; Champion and protector of K'un-Lun
Education
High School level on Earth and taught by her masters in K'un-Lun lore and styles of fighting
Origin
Origin
Human, though it is believed Sera may be the reincarnation of Fongji of this universe who was a former host of the Phoenix
Place of Birth
K'un-Lun
Creators

Everyone says I am the new Phoenix for a reason, I can't help wonder what my destiny has in store.

-- Sera Kenina with her thoughts on being the new Phoenix Avatar

Sera's family is unknown but were natives to K'un-Lun. She was found on the streets of K'un-Lun struggling to survive, her parents believed to have either passed away or abandoned the young girl. She would eventually be found by her future best friend Chris Rand's father, Danny Rand, the original Immortal Iron Fist, by chance when going through the city. Though she was never adopted into the Rand family she became quite close to them, especially Chris Rand who she began to harbor a crush on.

During her time of living with the Rands she would often watch them training in the arts of K'un-Lun's martial arts and chi manipulation. But due to law she was not allowed to learn and could only watch. Because of this, in her younger years Sera spent much of her time reading books and scrolls available to her, hardly noticing that something was stirring inside her or of the role she would come to play soon enough. In fact, one of these days that she was reading about the many legends and myths, she happened across the legend of the Phoenix and subconsciously her eyes flashed orange briefly, catching the attention of the monks.

When Sera was ten an elder approached Danny about something, a prophecy that was repeating itself from many years ago. And Sera was meant to be the center of this very prophecy involving the return of the "fire bird that was once tamed by the dragon" after they explained what they saw a few months prior and immediately she was put into training. But luckily, Sera had watched many of the training sessions she began to pick up on it quickly in terms of the martial arts and gradually the same for her Chi Manipulation training. But during these kinds of training, Sera showed cosmic flames often and her chi often took the form of a raptor bird, further cementing her fate as the new Phoenix Avatar of this reality and leading many to nickname her the reincarnation of Fongji or "Second coming of the Firebird".

Unfortunately, her days of training proved difficult due to the fact she was a female and many of the male students viewed her as not needing to be among them. Danny usually scolded their ruthless behavior and Sera usually ignored them, proving them wrong when she was chosen as one of the top of their class and potential to be the Iron Fist. Though initially expected to follow the path as Fongji before her, Sera decided to forgo the attempt since she felt Chris was more deserving of it and resigned herself to where she was. Later, she would witness Chris emerge as the new Iron Fist and subsequently join in his exploits in helping K'un-Lun for the next two years, becoming one of it's champions and gradually tapping into a small portion of the Phoenix abilities.

Eventually, K'un-Lun would come to make it's appearance on Earth once more and following a meeting Danny Rand had with old faces would return of news about the Avengers Academy. Encouraging his son to pursue a new journey of his own among the school, Sera was also chosen to go with the young Rand which she expressed joy about. But what she didn't know was that Chris was also meant to act as a potential guardian of sorts of keep her Phoenix side in check if she were to ever lose control. Oblivious to this, Sera packed some of her belongings and left with her friend to Los Angeles.

Though it was on that first day that Sera began to meet others similar to them she found herself annoyed at the fact Chris had his attention held elsewhere. Realizing his sudden attraction towards Claire, Sera rudely butted into their introduction, causing an immediate rivalry between the two that Chris seems to not notice.

Without her chi Sera possess strength equal to that of a human woman her age, height, and weight but with augmenting this with her chi it can be greater then that.

Retrieved from "https://marvelcomicsfanon.fandom.com/wiki/Sera_Kenina_(Earth-7194)?oldid=162439"
Community content is available under CC-BY-SA unless otherwise noted.