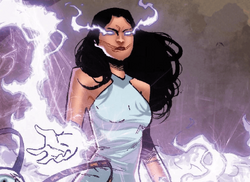 Every time we leave Heven, I'm reminded of how blessed I am... and how damned all others seemed to be.

Raised in the Tenth Realm of Heven, Sera trained in the art of mysticism among the angels. After the Order of the World Tree began waging war among the Realms, the Angels of Heven initially tried to fight against them, but suffered heavy losses.

Sera has gone on to ally herself with the Trickster Goddess Loki, and together the two have formed the Valkyries, a team dedicated to being a thorn in Surtur's side.

Retrieved from "https://marvelcomicsfanon.fandom.com/wiki/Sera_(Earth-2001)?oldid=262355"
Community content is available under CC-BY-SA unless otherwise noted.