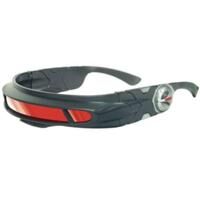 Shortly after Dorian Banner first transformed into his Gamma alter ego Ira, and joined The Ultras. Nick Fury had Franklin Richards create a device that would somewhat control Ira. Richards spent less than a day creating the device, the functions of the device were: Dorian would put it on, like a visor, Dorian would then type in the objectives for Ira before it transformed him into Ira. When transformed Ira would follow these objectives without question as if they had been implanted into his brain.