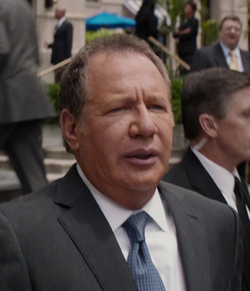 I think we're done with the point that he's making. I don't think there's any reason..."
"The point is you're welcome, I guess."
"For what?"
"Because I'm your nuclear deterrent. It's working. We're safe. America is secure. You want my property? You can't have it. But I did you a big favor. I have successfully privatised world peace.

Approximately a year after Tony Stark became the superhero Iron Man, Senator Stern had a meeting with Stark's friend Colonel James Rhodes of the U.S. Air Force. They discussed Stark's unpredictable behavior. Stern then introduced Rhodes to General Thaddeus Ross with hopes of sending a message that the U.S. doesn't need Iron Man, with the plan to replace him with the Aerodynamic Marvel.

It's amazing how annoying a little prick can be.

Some time later, Tony Stark was summoned to attend a Senate Armed Forces Committee in Washington, D.C. in order to force him to give his technology to the United States government. Stern demanded that Stark give the Iron Man technology to the U.S. government since it was deemed dangerous to the public and would be converted for military use. Stark refused, claiming that foreign nations and business competitors were years away from successfully recreating his achievements, and that the armor was in fact his own property and that it was not as dangerous as the shown footage proved to be. Instead, it was Justin Hammer who was attempting the same objective which Stark revealed on footage. Although Stern tried his best to forge through evidence and get the courts on his side, Stark outwitted him and won the case, causing indignant backlash from a defeated Stern.

Senator Stern was on television soon after Stark and Ivan Vanko fought in Monaco relaying how Stark was wrong about Arc Reactor technology being five to ten years away. Potts and Stark watched his interview as they rode a plane home.

We present these honoured badges to Col. James Rhodes and Tony Stark who is, of course, a national treasure.

After the battle at Stark Expo, Stern was forced to present Stark and James Rhodes with their medals for bravery after they destroyed Hammer's drones and Ivan Vanko's suit much to his dismay to which Stark took pleasure to.

In 2014, Stern had a meeting with fellow HYDRA member Jasper Sitwell. As the meeting came to a close, Stern and Sitwell discussed Stern's plan to be with a twenty-three year old who desired to be a reporter and how she was messing up his back. Then Stern whispered 'Hail HYDRA' into Sitwell's ear. Stern was later arrested by the FBI after HYDRA's infiltration into S.H.I.E.L.D. was made public.

Retrieved from "https://marvelcomicsfanon.fandom.com/wiki/Senator_Stern_(Earth-1010)?oldid=126050"
Community content is available under CC-BY-SA unless otherwise noted.