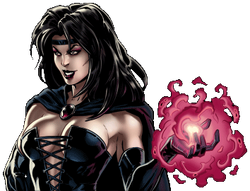 Widowed
Occupation
Sorceress
Education
Self-taught over centuries
Origin
Origin
Selene is a type of mutant, an immortal External, and magician. She has been around for several millennia, but claims to have been old when human beings were just appearing.
Place of Birth
Central Europe
Creators

Selene was born 17,000 years ago in central Europe, "After the Oceans swallowed Atlantis" and "Before the rise of the sons of Aryas". Selene's mother was young when she bore her, but would be dead before Selene spoke her first words. The tribal elders ordered her mother's people to sacrifice themselves to Selene until none remained. They thus gave her sustenance and her name.

She was an old enemy of sorcerer Kulan Gath. Red Sonja reportedly managed to kill him and his spirit would not manifest again until the modern age. Thus, Selene was active at least as early as the Hyborian Age. Selene is assumed to have been wandering the world for millennia.

During the times of the Roman Empire, Selene had an eye on Senator Eliphas, who was used by others for their own benefit. She came before him, offering him her eternal love and immortality, if he helped her sacrifice the countless souls of Rome. The thousands of souls that she would feed on would allow her to become as powerful as a god. She instructed her pawn to draw symbols around the city in his own blood for the ritual. However, Eliphas made one small act of compassion by telling a slave girl he gave ruby earrings to about what was going to happen. Her father informed the authorities, who captured both Eliphas and Selene and sentenced them to be burned at the stake. Selene awoke before it could happen and set the flames back against their would-be executioners. Furious at Eliphas for seemingly betraying her, she took his life-force and transformed him into a vampire-like creature, swearing that he would never see her again.

Selene created the land of Nova Roma in Brazil, bringing outsiders to her paradise with her psychic powers and forcing them to worship her as the Dark Priestess. She led everyone to believe Nova Roma was a colony of the ancient Roman Empire, until she was discovered. Intrigued by seeing the young heroes use their powers, Selene traveled to New York City.

In New York, Selene became interested in the Hellfire Club and joined it's Inner Circle.

Life-Force Absorption: by psionically draining the life forces of other human beings into herself, by physical touch. If she drained a person’s entire life force from him or her, the victim dies and the victim’s body crumbles into dust. It is unknown how often Selene must drain life force from another human in order to survive. It is known, that great expenditure of power causes Selene to age, but she can rejuvenate herself by absorbing more life force. Selene will not age as long as she maintains her supply of absorbed life force.

Physical Enhancement: By using the absorbed life energies that sustain her, Selene can enhance her physical strength, speed, stamina, agility, reflexes, and durability to superhuman levels.

Shadow-Morphing: allowing her to dematerialize or use solid tendrils of darkness to manipulate objects

Astral Projection: Her telepathy is strong enough for her to survive in her astral form.

Pyrokinesis: could psionically generate and project intense heat and flame from and around her body or direct it at certain distances. The exact radius remains unknown. She was also able to manipulate flame created from other sources and could magnify their intensity or snuff them. The flames Selene generated could also be illusory in effect; for example, she could focus the power on an object making it appear to be on fire while it was not being damaged by the flames at all. Selene instinctively created a psionic force field about her entire body that protected her from the effects of the heat and flame she created and from other sources as well

Telepathy:High Order telepath. She is capable of displaying various psionic feats with the minds of others including reading and communicating with thoughts over vast distances.

Immortal: her aging process is greatly retarded and she can apparently regenerate injured or missing cells from even near-fatal injuries.

Sorcery: possesses considerable magical abilities, having gained a great deal of mystical knowledge over the millennia. The number of magical effects that she can create has yet to be cataloged, but it is known that she can cast and counteract spells and summon extra-dimensional demons.

Darkforce or Shadow Manipulation: It is seen that she can turn herself into a shadow figure enabling her to blend in.

Retrieved from "https://marvelcomicsfanon.fandom.com/wiki/Selene_Gallio_(Earth-1010)?oldid=255893"
Community content is available under CC-BY-SA unless otherwise noted.