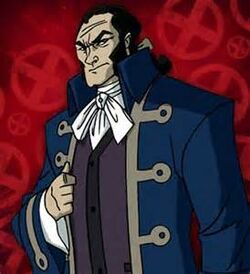 Kinetic Energy Absorption: Sebastian Shaw is an Alpha-Level Mutant with the superhuman ability to absorb kinetic energy and to metabolize it to enhance his own physical strength, speed, and stamina. This makes him extremely difficult to defeat in battle, as every blow struck against him only makes him stronger. Unusual tactics are required to defeat him, usually by incapacitating him or by attacking him psionically. Shaw absorbs the energy of any blow he is struck by, not just punches, but also projectiles like bullets, and to a less successful degree, electricity and physically based energy beams. Without absorbing energy, Shaw is merely a strong ordinary human, though normally he works to keep his strength at a superhuman level.

Limited Telepathy: He has also shown some telepathic ability.

Skilled Leader: Being leader of the Hellfire Club has given Shaw some level of leadership and strategy skills. Shaw also has a shrewd business mind.

Without having absorbed additional energy, Sebastian Shaw possesses the normal strength of a man of his age, height, and build who engages in intensive regular exercise. However, Shaw can gain superhuman levels of strength by absorbing kinetic energy, and usually takes care to absorb enough in order to keep his strength at a superhuman level throughout his waking hours: for example, upon waking he will punch walls repeatedly in order to build up his reserves of absorbed energy. There is a limit to the amount of physical strength Shaw can achieve, but it as yet remains unknown.

Power Limitations: Shaw's abilities can be overloaded by too great an influx of power, like being hit with too many superhumanly strong punches. Shaw can also be defeated if an opponent focuses on simply immobilizing him without striking him with significant force, or if something heavy falls on him, for though he can sap the kinetic falling energy, the weight of the object could still crush him, unless he is strong enough to lift/stop it. There is an upper limit to the amount of energy that Shaw can absorb and convert.

Equipment: Shaw has the resources of both his own corporation and the Hellfire Club at his disposal.
Transportation: None known.
Weapons: None known.

Retrieved from "https://marvelcomicsfanon.fandom.com/wiki/Sebastian_Shaw_(Earth-727)?oldid=261227"
Community content is available under CC-BY-SA unless otherwise noted.