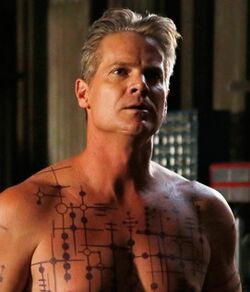 Grey
Unusual Features
Tattoos covering his body
Status
Occupation
Former S.H.I.E.L.D. agent
Origin
Origin
Sebastian Derik was a test subject revived through the T.A.H.I.T.I. project, but was driven crazy by the GH.325 serum and became obsessed with a series of carvings.
Creators

Years later, Derik had covered his body in tattoos of the glyphs. He had realized he could bring back his memories of the T.A.H.I.T.I. project by experiencing pain, and started hunting down the remaining test subjects. After killing Janice Robbins, the former Agent Rebecca Stevens, the now-Director Phil Coulson took notice of Derik's activities. However, Coulson and S.H.I.E.L.D. did not know which former T.A.H.I.T.I. test subject was doing the killings, and Coulson subjected himself to a memory machine to bring back his memories of the project. Meanwhile, Derik tracked down the only other remaining test subject, Hank Thompson, but he could not help Derik understand the carvings any further. Once Coulson had arrived at Thompson's residence and demanded at gunpoint he reveal anything he knew about the carvings, Derik was able to sneak up behind him and knock him out. Derik then tied up Coulson, Thompson, and Thompson's family in Thompson's barn where Thompson and his son had assembled a model train set. Derik started retelling his story to Coulson, but Thompson managed to cut his way out of his binds. Derik noticed he was escaping and threw his knife at him, but Thompson managed to catch it in mid-air and throw it back at him. Derik managed to dodge the knife but it cut through Coulson's bonds as well, freeing him. Derik and Coulson started fighting while Coulson tried to get Derik to realize something he had discovered about the carvings. Coulson eventually has Derik over a railing that looks down on Thompson's train set, but S.H.I.E.L.D. agents arrive on he scene to apprehend both Derik and Coulson. Fearing their director might be lost to the GH.235 serum, they pull their guns on the two of them and are prepared to shoot. Just as they are about to shoot, Derik opened his eyes and saw what Coulson was trying to show him. The carvings are meant to be viewed in three dimensions, revealing them as a blueprint for a city. With Derik subdued, he is turned over to the authorities for his crimes.

Retrieved from "https://marvelcomicsfanon.fandom.com/wiki/Sebastian_Derik_(Earth-1010)?oldid=98335"
Community content is available under CC-BY-SA unless otherwise noted.