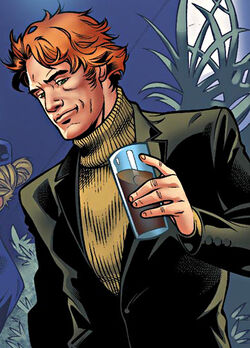 I've met around a lot of strange lads and lasses around this town me whole lonely life, and I gotta confess... Ye're a very different one...

Sean Cassidy was born between the early to mid-1950s as the heir to the castle and estate of Cassidy Keep, Ireland, as well as a small fortune. A young Sean would've been the eldest of the Cassidy's two children, but tragedy struck when his younger sibling had met its unexpected fate after the fetus had undergo a mutation, a mutation which proved to be fatal to his mother. Seeing that his mother's life was in jeopardy, the doctors had no other choice but to chose on aborting before the fetus' mutation could've kill itself along with the mother who was still carrying it inside her womb, an unforgettable incident that heavily scarred and burdened both Sean himself, and undoubtedly his parents. As his mother couldn't bare the guilt of losing her mutant child, the former ended up in a catatonic state, which forced his father to send her into psychiatric care in hopes of recovering sooner.

Living with both his father's stoic parenting and his relative's never-ending expectations for him to excel at school, Sean grew up to be a studious and academic lad since it was the only thing he knew how to live his young life. Outside of it, the only people he got to befriend were either people from his neighborhood, or few of his classmates, practically making Sean a social outcast due to his unfortunate circumstances of mostly being isolated. After graduating from Galway-Mayo Institute of Technology with the degree of Bachelor of Science in the program of Forensic Science and Analysis, Sean had dreamt of becoming a detective at Interpol, the international law enforcement organization, but as unfortunately disappointing as reality usually is, a young adult Sean had no clue that he had to start from the very bottom as most things in the world of employment even if he was born and raised with a silver spoon. Starting off his dream somewhere in Galway, West Ireland, Sean signed up as a rookie detective in Garda Síochána, his homeland's national police service. Upon entering his designated station for the very first time, Sean was wholeheartedly welcomed by his colleagues and superiors.

As the veteran detective Rourke had met the younger rookie detective Sean, she went on to consider him as the first and worst partner she had ever met. Teaming up, Sean was often disliked by Rourke whenever their own a mission since the latter was mostly clumsy and anxious in dealing with criminals, at least without a veteran to look up to. Rourke questioned how Sean even got the smarts and qualifications of being a detective when he lacked the guts to be one, to which her superiors simply flattered her that she was "one of the best among them," as an excuse that most of their colleagues didn't want to take care of Sean. Having no other choice but to follow orders, Rourke endured becoming a mentor figure to her partner for the next following years of her time as a veteran. However, surprisingly enough, Maeve's frequent annoyance teaching and training Sean was one of the many first instances that has gotten her and the rookie detective a lot closer, which she never expected would even happen.

While the two would eventually develop to have a friendly mentor-mentee relationship even outside of work, Rourke chose to both keep her mutant status and attraction for him, both which she did not hid well on the the night Sean were almost shot by mobsters in the middle of the street. As an act of instinct to protect her partner's life, Rourke vocally unleashed her sonic powers once again after several years. Screaming at the attackers which easily knocked them, an extremely-agitated Rourke tried to run away from the scene only for Sean to follow her out of concern, calming her down even if he finally knew her secret as a mutant. To Sean's eyes, all he wanted to ensure was that Rourke was okay.

Rourke told him to stay back and stay away, but Sean told her that he isn't afraid, but was instead concerned for his partner. As Maeve temporarily hid and stayed at her partner's place away from the mobsters for the night, the two opened up to each other, with Maeve telling her life growing up as a carefree mutant at Belfast, Maine in the United States, while Sean confessed that he had a mutant sibling who unfortunately died when it was still a fetus. One thing led to another and then another, although as dawn reaches, Sean was perplexed to find Rourke aiming a pistol to his head. Despite knowing how they felt for each other, Rourke still knew inside that she couldn't and probably wouldn't trust anyone, even her own partner, to which she left his apartment afterwards.

Sean was dejected thinking that Rourke still doesn't trust him, but so was that letter since she truly felt his sincerity. Nevertheless of her overwhelming feelings, she focused on her ultimate goal to leave her country after finding her own colleagues and superiors at have found out that she was a mutant in the form of their superiors being one of the notable witnesses. Knowing how mutantphobic most the people on her town was, Rourke planned to move back to the United States. On her way to Dublin Airport, however, Rourke was unlucky that the henchmen of the very mobsters who she encountered the other night were chasing after her. At that point, her luck was running out, until Sean suddenly came to her aid after revealing that he's willing to help her get to the States unscathed. Assuring that she could trust him no matter what, Rourke was able to get into her flight just in time while Sean distracted the mobsters outside the airport.

Now that the very woman that he loves was on her own, so was Sean, who had to face the mobsters alone until they were able to be subdued and apprehended, thanks to the arrival of his colleagues who rushed into the scene by the last minute, responding to his call for back-up. As years went by, the once rookie detective Sean Cassidy eventually became a fully professional and genuinely respectable inspector at Interpol, the international law enforcement organization, achieving his life-long dream but sadly having no one else in his personal life to celebrate it with, especially not with his old partner Maeve Rourke, whom he still longed for after she left the country for her own good and safety. As Sean pursued his career at Interpol for the next following decades, he eventually came in terms of leaving the agency into retirement of his late forties without regret. Having no more civic duties and responsibilities to hold him back, Sean finally got the chance to fly to the United States and unhesitatingly came to visit her residence in Maine by the late 2000s, reuniting the old flames together along with Sean meeting the sole product of their love, his daughter Theresa Cassidy. They were separated by fate for an extremely long time, yet none of them have moved on from each other.

Retrieved from "https://marvelcomicsfanon.fandom.com/wiki/Sean_Cassidy_(Earth-61615)?oldid=267762"
Community content is available under CC-BY-SA unless otherwise noted.