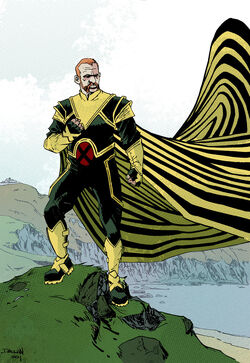 My powers and personality are polar opposites. I'd prefer to read a book and be quiet. But there's something about screaming your troubles away.

Sean Cassidy was born into a family of great wealth. He had a mansion and a butler, but his parents were killed when he was but 3 years old. He was raised by the butler, who was named Jonathan. His only friend growing up was his cousin Thomas. As young adults, he began growing distant from Thomas, because they bickered constantly. This only grew worse after they fell in love with the same girl (Maeve Rourke), and Sean eventually married her. While married, he served a brief stint as an English professor before being a detective. He only would go in the field alone, where he used his mutant powers to help take out crooks. No one else knew of his powers.

During an extended job with his detective agency, his wife was pregnant, and he had a daughter, Theresa. His wife was killed in a bombing, and his infant daughter was taken away. When he returned, he found his wife had been killed, and he thought his daughter had as well. He quit the agency in despair, and began doing some vigilante activities in Ireland, creating rumors of a "savior banshee." Soon, the "savior banshee" was captured by a group known only as "Factor Three." He was forced to act as their criminal agent, or he would be killed. In an altercation with the X-Men, he was able to remove his restraints, and he helped the X-Men take down Factor Three. He then acted as their ally from time to time.

Soon, though, he was contacted by Cerebro. He told him that his services were needed once again, that the X-Men he had worked with had been captured, and that he needed him to help rescue them. Armed with a new costume, Banshee helped the rescue squad take down Krakoa and its' monsters and free the X-Men. The original team decided to leave after Krakoa's torture. With the original X-Men out of the picture, Banshee was made a full-time X-Man.

Sonokinesis: Sean has the ability to manipulate sound. So far this has only been demonstrated through his...

Flight: Sean can use his screams to carry himself aloft.

Sonar: Sean is capable of using his powers as a form of sonar to locate almost any object or person.

Sonic Shield: Sean can tighten the sound waves around others to create a makeshift force field that can also protect them from the force of his scream.

Vocal Trance: By screaming at the lowest possible pitch, he can mesmerize others and force them to do his bidding.

Vocal Disorientation: By screaming in a medium pitch, he can alter the balance of others by affecting the fluid in their ear.

Retrieved from "https://marvelcomicsfanon.fandom.com/wiki/Sean_Cassidy_(Earth-5)?oldid=189428"
Community content is available under CC-BY-SA unless otherwise noted.