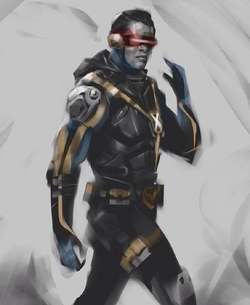 I can see more clearly now than ever before... that I'm one of the bad guys.

Scott Summers, and his little brother, Alex, lost their parents to Apocalypse's forces at a young age. Their potential was noticed by Apocalypse's top scientist, Mister Sinister, who took them in and raised them as his sons, harnessing their powers to become weapons of mass destruction.

As Cyclops and Havok, the Summers Brothers served as some of Apocalypse's most loyal lieutenants for years. However, Cyclops would eventually come into contact with the leader of the X-Men, Jean Grey, who made him feel something he had never known existed before. Their minds connected on a deeper level than Jean thought possible, but they were from two different worlds. Too conflicted and afraid to betray Apocalypse, Scott stays where he was raised, but keeps mental contact with Jean and relays information to her whenever he can.

However, his brother has become suspicious of him, and passed his concerns onto their father, Mister Sinister, who is beginning to consider rewriting Cyclops's memories, like he did with the former X-Man, Wolverine.

Cyclops eventually became brave enough to betray the Armada, even killing Gambit and Mister Sinister during his escape to join the X-Men. Not long after, a group of reality hopping heroes called the Outsiders came to Earth-9999 to help them defeat Apocalypse.

One of the Outsiders was Cable, Cyclops and Jean's son from another reality. Scott was almost brought to tears after meeting him, and the two spent as much time together as they could before the final battle. However, Cyclops met his end in the confrontation with Apocalypse, who beat him nearly to death before completely absorbing his powers and consciousness, just like he had done to Charles Xavier many years ago.

Retrieved from "https://marvelcomicsfanon.fandom.com/wiki/Scott_Summers_(Earth-9999)?oldid=246151"
Community content is available under CC-BY-SA unless otherwise noted.