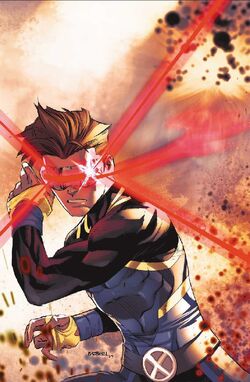 Earth-2212
Base Of Operations
The Nexus
Characteristics
Gender

I used to be scared to open my own eyes. I didn't want to hurt anyone, but now? I'm just scared of everything the multiverse can throw at us. I'm just a kid... I'm not meant for this.

Scott Summers and his little brother, Alex, became orphaned when their parents died in a plane crash. Scott fell into a coma, and Alex refused to leave his side until he woke up. Eventually, they were approached by a man named Charles Xavier, who used his telepathy to wake Scott from his coma, and bring the boys to his estate in New York.

From there, he began attempting to train Scott how to master his abilities, but no matter how hard he tried, he could not turn off his optic blasts. Xavier suspected his head trauma was the cause, but never gave up on him learning control. Over the years, Scott and Alex welcomed multiple new mutants to the mansion, including Bobby Drake, Hank McCoy, and Warren Worthington.

But even still Scott felt out of place, until he was introduced to a young woman named Jean Grey, who Professor X had been assisting since she was a little girl. The two of them quickly became close, and Scott began to have feelings for her. Unfortunately, he would never have a chance to act on them. Not long after the six young mutants became the superhero team the X-Men, they were confronted by the might of Apocalypse, and his Four Horsemen; War, Famine, Pestilence, and Death.

The X-Men fought valiantly, but one by one they fell. Cyclops watched Professor X murdered in cold blood by War, Iceman electrocuted to death by Famine, even Angel's wings were telekinetically ripped from his body by Death. Eventually, only Cyclops, Jean, and Havok remained to fight them off. They knew they wouldn't be able to be victorious on their own, so they devised a plan to escape and recruit back up in whatever way they could. But their was no way to escape the Horsemen, until Cyclops removed his visor and unleashed his full power on them. He told Alex and Jean to run, but they refused to leave him. He promised them he would meet back up with them, and he was just going to hold them off. Jean still chose to give him a tearful kiss before saying goodbye, and he turned back to Apocalypse and his Horsemen. He unleashed another blast on them, but was no match for their combined power.

Moments before his death, however, he was plucked out of his reality by the Silver Sentry and recruited onto Team X, where he was confronted with alternate versions of the same teammates he had just witnessed fall to Apocalypse. He was particularly taken off guard by the appearance of Charles Xavier, whose body had been taken over by Apocalypse. He and the alternate version of Beast both attempted to attack him, but were stopped by the Scarlet Witch, who had read their minds. The Silver Sentry then intervened and explained how he had plucked them all out of time and space moments before their deaths so that they could serve on Team X to help repair the multiverse.

Scott was hesitant to join. He wanted to go back home and continue the fight against Apocalypse, but after seeing the potential chaos that could spread across the multiverse he realized it was too much to ignore. He was glad that the burden of leadership fell to Angel, as he still blamed himself for leading his team to their deaths. However, he found himself fascinated with the older version of Jean, who made it clear that a relationship between them would never happen. But this did not stop them from developing a certain bond that helped them both get through the horrors of the multiverse, eventually becoming the last two of the original team to remain on the team.

However, the Team would eventually find themselves in a reality where mutants had developed Sentinels to wipe out humanity, but a small contingent of mutants, led by Magneto, fight alongside the humans. Team X's mission was to eliminate Master Mold, only to discover that it was being powered by that reality's Scott Summers, whose connection to chaos energy made him a limitless power source. Cyclops's team members Wolverine and Angela believed the only solution was to kill him, but Cyclops disagreed. It was then that the Silver Sentry appeared to them, explaining that if Cyclops were to remain in this reality to take control of the Sentinels for good, the Team's mission would be completed. Cyclops agreed, and was replaced with that same reality's version of Toad.

From then, Cyclops turned over his alternate self to the human military and inserted himself into Master Mold, helping to turn the tide against the mutant revolution. They eventually claimed victory, and the people of that world treated Scott like a hero, which was something he had never truly experience. Still, he could not shake the thought that because his mission was complete, he should move on, or at least return home to see his brother and Jean, if they were even still alive.

Cyclops was eventually re-recruited onto Team X as a replacement for his old friend and teammate, the Scarlet Witch. However, due to his youth and self-doubt still being at his forefront, the Tallus was instead transferred over to Spider-Girl. Cyclops continued to serve with the Team for several missions, eventually even being gifted with the Tallus himself following Spider-Girl's untimely death. He was eventually able to uncover a conspiracy surrounding the Silver Sentry, and Team X launches a rebellion against him.

They were powerless against him. Cyclops and all of his teammates, Okoye, Wasp, Mockingbird, and the Scarlet Speedster were placed in the stasis wall of the Nexus, and replaced with a new Team X, who were led to believe they were the first iteration of the team. But eventually, the new Team discovered the truth as well and were able to free the prisoners, finally becoming powerful enough to stop the Sentry.

Cyclops and his teammates were then faced with the option to return home, having gained control over the Nexus. Scott initially believed he should, but after getting a glimpse into his reality and discovering the fight against Apocalypse had already been won, and that his brother, Alex, and Jean were now married, he decided to stay with the Team. He eventually even uncovered another of the Silver Sentry's ruses, and that the Scarlet Witch had been trapped in a reality not her own, so he teamed with Mirage to save her and convince her to rejoin the Team.

Retrieved from "https://marvelcomicsfanon.fandom.com/wiki/Scott_Summers_(Earth-2212)?oldid=251526"
Community content is available under CC-BY-SA unless otherwise noted.