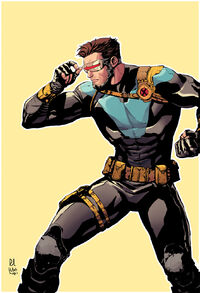 Scott was the youngest child of a rather average family. Growing up, Scott was close with his older brother, Alex and the two had a relatively normal childhood.

Until in 2007, Alex, now fifteen-years-old's mutant powers manifested although this did not change Scott's view of his brother. The mutant Charles Xavier would come to Scott's house and offer Alex a place at his school where mutants can find safety and solitude while learning to control their powers, Alex would enroll at his school and leave home. Scott would go on to miss his brother dearly.

In 2013, Scott, now a sophomore, is in school learning about the Mole Man Invasion. During class, his eyes start to bother him causing him discomfort. Scott then asks the teacher if he could go to the bathroom, Scott hides himself in a cubicle and suddenly a red beam emits from Scott's eyes destroying the bathroom he is currently in.

Alex, now a graduate of Xavier's School returns home after hearing of his brother's ability. At the request and concern of his parents, they ask Alex to take Scott to Xavier's School for his own safety. After arriving in Westchester, he would go on to meet and develop a crush on Jean Grey, he would meet Charles Xavier and agree to join the school.

In 2014, after the Mole Man Invasion and Attack of Ultron and the growing threat of Magneto's terrorist attacks, Xavier would form a team of his top students and send them into the field to protect humanity and stop Magneto and would assign Scott as the field leader of the team.

A month after the encounter with Magneto, the X-Men discover an intruder on Xavier's estate. The X-Men suit up to battle the intruder only to be defeated quickly and easily by him, the intruder then reveals himself to be Cable and that he is here to help. The X-Men then take Cable to Xavier and Xavier confirms that Cable is indeed there to help while also revealing he's from the future and the son of Scott and Jean. Now trusting Cable, Cable then informs Xavier and the X-Men that in the future, Galactus arrives and defeats Earth's superheroes and creates a hellish future. The X-Men then ask how are they supposed to defeat him to which Cable explains that this time the world's superheroes will be prepared for him and that they all had to unite against Galactus

When Galactus arrives, Fury sends Cyclops and the X-Men with the help of the Avengers and Fantastic Four into the field to distract Galactus while Tony Stark, Hank Pym and Reed Richards work on a way to stop him once and for all. When they arrive into the city and start battling Galactus, Hulk, Thor and the Thing are the heaviest hitters and causing the most damage to Galactus until he blasts them with cosmic energy causing Hulk to revert into Banner and Thor and the Thing to be knocked unconscious. Without their heavy hitters the three teams are decimated by Galactus' powers. As Galactus is about to kill the three teams, the Invisible Woman protects them with a psionic shield bubble but is diminishing her strength. Silver Surfer and Cable arrive to help, Cable is quickly knocked out but Silver Surfer gives Galactus a run for his money, realising he can't defeat Galactus alone, Silver Surfer retreats and uses an untapped power the allows him to teleport himself, the other superheroes (including Spider-Man and Daredevil) back to the Triskelion.

Silver Surfer warns Nick Fury that Galactus sees them as a threat now and will be coming for them. Stark, Pym and Richards notify Cyclops and the other heroes that they have discovered a dimension called the Negative Zone that has no life in it and if they could create a wormhole and find a way to push him inside of it, they can defeat him. Quicksilver then notifies them that if they know how to build it and tell him how to build it, he'll use his superspeed to get it built fast, Stark, Pym, Reed and Banner then begin brain storming on how to create a device that can create wormholes.

Suddenly, Galactus arrives and attacks the Triskelion. Cyclops and the heroes begin battling Galactus to hold him off while the brains attempt to blueprint a wormhole device. After a long battle the heroes are defeated by Galactus but luckily the brains have come up with a way of creating a portal device, they wake up Quicksilver to build the mission, although Quicksilver will need a distraction, Banner transforms into the Hulk in a berserker rage and begins pounding Galactus. From looking at the blueprints, Quicksilver builds the device and activates it creating a wormhole. Hulk with a limited understanding keeps on punching Galactus in the direction of the wormhole and attempts to push him into it, as Galactus falls into the wormhole he grabs the Hulk and with no way to escape his fate seems to be sealed.

Until Silver Surfer zooms in and tackles Galactus into the wormhole going inside with him. Quicksilver quickly shuts down the device closing the wormhole forever, after successfully averting the dystopian future Cable hails from, he begins fading from existence. As he is fading, Cable thanks Daredevil, Spider-Man, Wolverine, Iceman and Quicksilver for being a family to him when no one else would in the future and he tells Cyclops and Marvel Girl that he loves them and hopes to see them again soon. Jean would be devastated at her son fading from existence, this would also effect Scott as he would comfort her while she is bawling her eyes out.

A few weeks later, Jean would lock herself in her room, scarred over losing her son who she never got to know. Scott was also hurt but wanted to give her her space so he went to New York to help rebuild it alongside the other X-Men.

In the months following the Galactus Event, the X-Men would go through huge changes. The media would praise the X-Men for helping defeat Galactus, some people have opened up to living alongside mutants, the X-Men received new uniforms and the X-Men would gain new teammates; Nightcrawler, Shadowcat and Beast. Although Scott and Jean were still upset over the loss of Cable, and Wolverine hadn't returned from his leave of absence. Scott and Jean would also enter a relationship.

Retrieved from "https://marvelcomicsfanon.fandom.com/wiki/Scott_Summers_(Earth-1111)?oldid=176503"
Community content is available under CC-BY-SA unless otherwise noted.