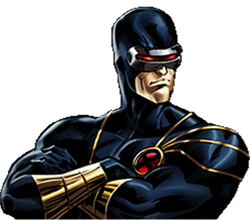 Scott Summers is the oldest son of Major Christopher Summers, a test pilot in the U.S. Air Force and his wife Katherine Ann. His younger brother is Alex, known today as the mutant Havok.

When Scott and Alex were boys flying home from a family vacation in their father's vintage private plane, a scout ship from the alien Shi'ar Empire suddenly materialized and set the plane ablaze. Katherine pushed Scott and Alex out the plane door with the only available parachute. The parachute caught fire, so Scott used his mutant optic blasts for the first time to slow their descent. Scott and Alex were unaware that their parents had been teleported from the plane by the Shi'ar a moment before it exploded.

Scott suffered a head injury on landing that damaged the part of Scott's brain that would have enabled him to control his optic blasts. The two boys were hospitalized and both suffered traumatic amnesia regarding the incident. The geneticist, who happened to be Mr. Sinister, took an interest in the boys. He believed that Scott was the Summers brother with the most potential, so he had Alex adopted to separate them and render Scott emotionally vulnerable, something he became.

One night, Scott woke up and destroyed the roof of the hospital with his optic blast. When Scott woke up again, a year had passed. Upon recovering, Scott was placed in the State Home for Foundlings, an orphanage in Omaha, Nebraska. There he was subjected to batteries of tests and experiments by the orphanage's owner, Mr. Milbury, an alias for Mr. Sinister. Sinister placed mental blocks on Scott and took on the role of "Lefty", who was Scott's roommate and bullied him at the orphanage. Sinister intervened any time anyone came close to adopting Scott.

As a teenager Scott began to suffer from severe headaches and he was sent to a specialist (again Sinister in disguise), who provided him with lenses made of ruby-quartz. Soon after, Scott's mutant power erupted from his eyes as an uncontrollable blast of optic force. The blast demolished a crane, causing it to drop its payload toward a terrified crowd. Scott saved everyone by obliterating the object with another blast, but the bystanders believed that he had tried to kill them and rallied into an angry mob.

As a high school student, Scott was scolded and subsequently put into detention by his teacher for the wearing of his shades in class. Leaving school, he was attacked and captured by Victor Creed, who inadvertently knocked his glasses off, destroying the school's roof in the process. Creed brought Summers to a mutant testing facility at Three Mile Island. There, his mutant genes were sampled, and placed into Wade Wilson as part of an amalgamation of powers.

He was released from the prison by Wolverine and, alongside Emma, led the other mutants out. On his way out, he was telepathically contacted by Charles Xavier before they flew off in his helicopter.

Cyclops became the leader of the X-Men leader and a teacher at Xavier's School for Gifted Youngsters. He had a long-term relationship with Jean Grey.

Optic Blast: Cyclops possesses the mutant ability to project a powerful beam of concussive, ruby-colored force from his eyes. Cyclops's powers were originally believed to be ambient energies (such as solar radiation, photons, and cosmic rays) absorbed and metabolized by his body into concussive blasts that are released from his eyes. However, the energy supply of his optic blasts are later revealed to originate from a non-Einsteinian universe that opens up whenever he uses his optic blasts.

Cyclops's eyes not only are organs that utilizes the visible spectrum of light to see the world around it.

Cyclops's mind has a particular psionic field that is attuned to the forces that maintain the apertures that have taken the place of his eyes. Because his mind's psionic field envelops his body, it automatically shunts the other-dimensional particles back into their point of origin when they collide with his body. Thus, his body is protected from the effects of the particles, and even the thin membrane of his eyelids is sufficient to block the emission of energy. The synthetic ruby quartz crystal used to fashion the lenses of Cyclops's eyeglasses and visor is resonant to his minds' psionic field and is similarly protected.

The width of Cyclops's eye-blasts seems to be focused by his mind's psionic field with the same autonomic function that regulated his original eyes' ability to focus. As Cyclops focuses, the size of the aperture changes and thus act as a valve to control the flow of particles and beam's relative power. The height of Cyclops's eye-blast is controlled by his visor's adjustable slit. His narrowest beam, about the diameter of a pencil at a distance of 4 feet has a force of about two pounds per square inch. His broadest beam, about 90 feet across at a distance of fifty feet, has a force of about 10 pounds per square inch. His most powerful eye-blast is a beam four feet across which, at a distance of 50 feet, has a force of 500 pounds per square inch. The maximum angular measurement of Cyclops's eye-blast is equivalent to a wide-angle 35mm camera lens field of view (90 degrees measured diagonally, or the angle subtended by holding a magazine's pages spread open, upright at 9.5 inches from your eyes). The minimum angular measurement is equivalent to the angle that the thickness of a pencil would subtend at 4 feet (3.5 degrees, about a quarter of an inch viewed at 4 feet). The beam's effective range is about 2,000 feet, at which point a 1-inch beam has spread out to 10 feet square, and then has a pressure of .38 pounds per square inch. Cyclops's maximum force is sufficient to tip over a filled 5,000 gallon tank at a distance of 20 feet, or puncture a 1-inch carbon-steel plate at a distance of 2 feet.

The extra dimensional supply of energy for Cyclops's eye-blast is practically infinite. Thus, so long as Cyclops's psionic field is active (which is constant), there is the potential to emit energy. The only limit to the eye-blast is the mental fatigue of focusing constantly. After about 15 minute of constant usage, the psionic field subsides and allows only a slight leakage of energy to pass through the aperture. Cyclops's metabolism will recover sufficiently for him to continue in about an additional 15 minutes.

The maximum force of Cyclops' optic blasts are unknown, but a commonly given description is that he can "punch holes through mountains".

Spatial Awareness: Cyclops possesses an uncanny sense of trigonometry, in this sense used to describe his observation of objects around himself and the angles found between surfaces of these objects. Cyclops has repeatedly demonstrated the ability to cause his optic blasts to ricochet and/or reflect off those objects in a trajectory to his liking. This is commonly called a "banked shot" when applied to this talent. Cyclops has been observed causing beams to reflect from over a dozen surfaces in the course of one blast, and still hit his intended target accurately. It is his sense of superhumanly enhanced spatial awareness that allows him to perform these feats as well.

Energy Resistance: Cyclops is resistant to the effects of his own powers. This is linked to him being capable of withstanding his brother's ability with no ill effects. This is a result of their close genetics, a quirk of mutant genetics that is common among siblings.

Expert Pilot: Cyclops is an expert pilot of fixed-wing aircraft, a skill he appears to have inherited from his father. It has also been implied that his trigonometric sense improves his abilities in the air.

Master Strategist and Tactician: Cyclops has spent most of his superhero career as the leader of the X-Men and has developed exceptional leadership skills. It is notable that regardless of their general attitude towards him, all of the X-Men tend to obey his orders in battle - because they know that he is usually right.

Expert Martial Artist: Cyclops also has extensive training in martial arts and unarmed combat, holding black belts in judo and aikido. His level of skill is sufficient to defeat six normal men with his eyes closed

Telepathic Resistance: Years of being in intimate situations with telepaths have allowed Cyclops to hone his mind to the point where he can resist telepathic intrusion and withhold certain information from high level telepaths.

Genetic Flaw: Cyclops is not immune to Vulcan's powers like he is to Havok's.

Power Regulation Disability: Due to psychological trauma and physical injury at a young age, Cyclops is unable to control his optic blasts. In connection, his eyes have become more reliant on the ruby quartz he uses rather than affecting change to the injury.

A separate pair of lenses were also designed for Scott to use while sleeping.
Transportation: X-Jet, Cyclops' Motorcycle
Weapons: None known.

Retrieved from "https://marvelcomicsfanon.fandom.com/wiki/Scott_Summers_(Earth-1010)?oldid=204361"
Community content is available under CC-BY-SA unless otherwise noted.