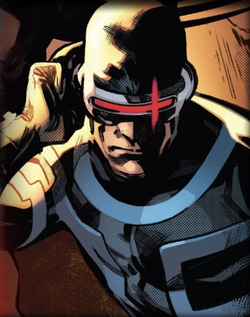 It's time for us to prove that mutants are not a menace! It's time to show the world that we are here to save them! Who's with me?!

Scott and his little brother, Alex, were raised in a small town in Anchorage, Alaska, by their two loving parents. When Scott was 10-years-old, their family decided to take a vacation to Europe, but due to strange magnetic interference, their plane malfunctioned and crashed, killing both of their parents. Scott suffered head trauma and went into a coma for two years.

By the time he had woken up, Alex had already been adopted by a nice family who lived in Hawaii. Scott, however, was left to the foster care system. He bounced from house to house, never quite feeling like he belonged. Eventually, when he was being picked on by some of his foster brothers, his mutant powers manifested and optic energy began pouring from his eyes, almost obliterating the foster house he was in. Horrified and unable to stop the energy beams, Scott was arrested and blindfolded. He fully expected to spend the rest of his life either behind bars or being dissected by the government, but neither of those things came to pass.

He was visited by a man named Charles Xavier, who revealed to Scott that he was a mutant, and that he was going to do everything in his power to help. Scott was given special ruby quartz glasses that allowed him to see, and was then taken to Xavier's mansion in Westchester, New York, where he was introduced to his fellow young mutants, Hank McCoy, Warren Worthington, Ororo Munroe, Kurt Wagner, and Jean Grey, who Scott instantly fell in love with. However, it took him some time to warm up to his new family. They respected his privacy, but when the time came for them to all come together as a team when Professor Xavier had been kidnapped by Magneto, Scott found himself stepping up as a leader.

In the ensuing battle with Magneto and his developing Brotherhood, Xavier's young mutants managed to prevail and bring him back to safety. They came to the conclusion that they could use their powers as heroes to show the world that mutants are not something to be afraid of, but rather something to embrace. They dubbed themselves "X-Force", in honor of Professor Xavier. However, the Westchester mansion had become compromised. In a desperate attempt to keep their home safe, they relocated to the living island of Krakoa, which considered Xavier its friend and allowed them to set up the new Xavier Institute within its borders.

Scott has since taken on the name "Cyclops" and is one of X-Force's most prominent members, often speaking in public to the press to try and leap their movement forward. He and Jean have also begun a romantic relationship, and have developed a psychic bond so deep that they can feel what the other is feeling from hundreds of miles away.

[[Category: In a Relationship with Jean Grey Characters]]

Retrieved from "https://marvelcomicsfanon.fandom.com/wiki/Scott_Summers_(Earth-101)?oldid=249091"
Community content is available under CC-BY-SA unless otherwise noted.