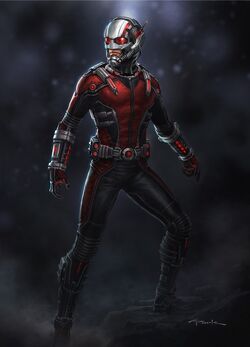 Divorced
Occupation
Adventurer and electrical engineer; formerly burglar
Education
Electronics technician certificate, plus additional advanced electronics training while in prison
Origin
Origin
Scott Lang stole an Ant-Man suit and Pym Particles canisters from Henry Pym, the original Ant-Man, in order to save the life of his ill daughter. Pym gave Lang permission to keep the uniform and a supply of gas after Lang had proven himself willing to use his powers on the right side of the law.
Place of Birth
Coral Gables, Florida
First appearance
Modern Comics:
Ant-Man Vol 1 1

Why don't you pick on someone your own size?

Scott Lang was working as an electrical engineer for VistaCorp when he discovered that the company was illegally overcharging clients, so he reported the find to Human Resources. Instead of correcting the measure, they had him fired for raising awareness of the problem. Scott contemplated seeking justice, but Peggy, his pregnant wife, insisted that he do nothing. Wishing to support his own family, Lang promised his wife that he would stop stealing after Cassie's birth.

Frustrated by his diabolical employers, he broke into his former boss's home and transferred the stolen funds from VistaCorp to the clients' bank accounts. After doing that, however, Scott got sidetracked and started taking food from his boss's refrigerator, playing in his office, and even stealing his car. He crashed the car into a pool, and was then caught and incarcerated at San Quentin State Prison for his actions. During his time in prison, however, Peggy divorced him, where she would later marry a police officer named Jim Paxton, much to Scott's dismay.

After having finished his sentence of three years, Scott was released, whereupon his return has unfortunately found out that his own daughter, Cassie, was recently diagnosed as having a serious congenital heart condition. Desperate to help his daughter be treated to a top-notch hospital, Lang decided to return to thievery with the help of his close friend and former cellmate Luis and his roommates, Dave and Kurt. Breaking into the San Francisco home of scientist and secret hero Hank Pym, Lang stole a version of the Ant-Man Suit, along with Pym Particles canisters, as an act of selling it to the black market in exchange for money enough to support his daughter.

Unbeknownst to him and his crew, Pym had observed the theft where he later followed Lang, curious to see what use he would put the paraphernalia. However, instead of actually continuing to sell the stolen suit and equipment, Scott finds himself terrified to deal with the customers who wanted to buy the latter, not knowing that they were secret representatives of the ancient paramilitary organization Hydra. As a result of his unintentional mistake, Scott was almost killed by the operatives, only to be miraculously saved by the guidance of Pym, who orders Scott to use the suit itself to defend himself from the attackers.

Thanks to Pym's guidance, Scott manages to get to safety by getting himself back to Pym's residence. There, he was convinced by Pym and his wife Janet (who was also the secret heroine Wasp) to take up his mantle as the new Ant-Man at least for once. As the second Ant-Man, Scott fought against Darren Cross, Pym's protégé who became obsessed with Pym Particles and intended to recreate and sell the technology to terrorist organizations such as Hydra and the Ten Rings. After his sick daughter Cassie, was sadistically taken hostage by Cross, who was now going by one of Pym's heroic persona Yellowjacket, Lang was still able to defeat the psychotic villain down and hand him over to the authorities, courtesy of S.H.I.E.L.D. under the division of Phil Coulson's team.

After the defeat and apparent death of Cross, Pym had greatly and successfully helped in save the life of Cassie by having her treated at Stark Meditech Center with the consented permission of Tony Stark himself, to which Lang intended to return the Ant-Man suit to its owner and turn himself in, but Pym offered to let him keep them, provided Lang put them to lawful and heroic use. In his new days as the Ant-Man, Scott was also been given a position as a honorary member of the Avengers, giving him an identicard and full access to the Avengers Tower, whenever he may be needing their help.

Only a few days after the events of Ultron Offensive, a group of enhanced and super-powered teenagers from the streets of New York City have decided to secretly assemble after a gigantic android only known as the Growing Man (who was secretly sent by a mysterious time traveler) had unleashed its destruction throughout the streets and alleyways of the city. The Avengers were even compelled to investigate the scene, but they were already late since the battle was revealed to be over thanks to the actions of the newly-formed juvenile superhero team. Much to Scott's surprise, one of those delinquents happened to be his own teenage daughter, Cassie, who secretly used a few samples of his Pym Particles without her father's awareness nor permission to begin with.

At first, of course, Scott was undoubtedly surprised and anxious, unknowingly lashing out at Cassie, scolding his own daughter out of his utmost concern for her. Despite this, however, Scott was able to understand what Cassie's motives were, eventually apologizing and telling his daughter that he couldn't be more proud of what her daughter deed, marking her first big steps as a hero, or more accurately at the time, a vigilante, going by the alias of Stature. The Avengers and S.H.I.E.L.D. as well, then honored the youngsters and expressed their gratitude for helping them in fighting the fights against the forces of evil, as they would later name their new team as the Young Avengers, and gave them a place into the Avengers Tower, whenever they need to reassemble again. In the meantime, Scott was granted approval by the Avengers to act as a mentor figure to the Young Avengers, to which he would be training the heroic teenagers, including Cassie, on how to deal with certain unpredictable events, even the Avengers themselves have yet to face, and by that, Scott eventually introduced them to the threats of space and time through accessing the Quantum Realm when deemed necessary. Interestingly, Scott was able to get this idea after one of the Young Avengers, Nathan Richards, finally revealed his backstory as the younger self of the chronic pirate and warlord, Kang the Conqueror.

The Movement Alliance conducted a series of massive terrorist attacks all over the world destroying the Brooklyn Bridge, Golden Gate Bridge, Eiffel Tower, Taj Mahal, and even the Great Wall of China, killing over 1,500 people on the very first day. Consequently, all the Movement's opposing adversaries, the heroes, were united into creating their own Ultimate Alliance, in order to stop and prevent the Movement from commencing its schemes upon world domination and unified evil sovereignty, before its too late.

Size Manipulation: With the Pym Particles, Scott can reduce his size down to less than one inch tall and increase his size above normal, approximately sixty-five feet tall and above.

Retrieved from "https://marvelcomicsfanon.fandom.com/wiki/Scott_Lang_(Earth-61615)?oldid=235585"
Community content is available under CC-BY-SA unless otherwise noted.