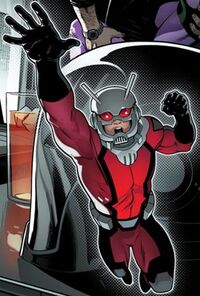 This is your chance. To earn that look in your daughter's eyes. To become the hero that she already thinks you are. It's not about saving our world, it's about saving theirs. Scott, I need you to be the Ant-Man.

Scott Lang was a young engineer who turned to crime to pay for to provide for his family. He was eventually caught and imprisoned. Shortly after being released, William "Crossfire" Cross kidnapped Scott's daughter and demanded the money he had borrowed, causing Scott to return to thievery. Among the items to he stole was the Ant-Man suit and helmet and once he figured out how to control the suit's shrinking abilities, started burglarizing as the new Ant-Man.

He was tracked down by Giant-Man and The Wasp who, after hearing Scott's story, offered to help him. The trio worked together to rescue Cassie and arrest Cross. Scott wanted to return the suit to Pym and turn himself him, but Hank insisted he keep them, provided Lang put them to lawful use. Lang was later recruited by Captain America into S.H.I.E.L.D.'s Secret Avengers.

Ant-Man was among the heroes Doctor Strange summoned to defeat the Master of the World. When confronted by Starkforce One, Scott found that Eshu had created a clone of him called Stinger. During the battle, Ant-Man sabotaged Eshu's machinery, destroying Hydra Island and Strikeforce One with it.

After the Avengers disappeared, the Secret Avengers attempted to replace them and rebranded themselves the New Avengers and moved into Avengers Mansion.

Retrieved from "https://marvelcomicsfanon.fandom.com/wiki/Scott_Lang_(Earth-2228)?oldid=192796"
Community content is available under CC-BY-SA unless otherwise noted.