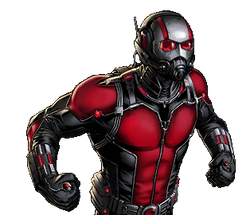 Single
Occupation
Adventurer and electronics technician; formerly burglar
Education
Electronics technician certificate, plus additional advanced electronics training while in prison
Origin
Origin
Scott Lang stole an Ant-Man suit and Pym Particles canisters from Dr. Henry Pym, the original Ant-Man, in order to save the life of his daughter. Pym gave Lang permission to keep the uniform and a supply of gas after Lang had proven himself willing to use his powers on the right side of the law.
Place of Birth
Coral Gables, Florida
Creators

Scott Lang got his girlfriend pregnant at the age of 16 and in an unlikely turn of events, he ended up keeping their daughter, Cassie. He was an electrical engineer, and when his daughter got sick from a rare disease, he badly needed money for the expensive medical treatment, and A.I.M. offered him money in exchange of Hank Pym's Pym Particles.

Lang was stealing Pym's Ant-Man suit and Pym Particles until the Heroes for Hire Luke Cage and Iron Fist confronted him. After telling Pym his story, Hank and the Heroes for Hire decided to help Scott with the money and Pym gave him the Ant-Man title.

Despite his criminal activity Lang is a man of honor, good morals and justice (though to the point of being stubborn); it was this that led him to his break-in at Pym's Lab. Scott's sense of honor also made him determined to go straight upon his release from prison, and only going back to criminal activities upon no other choice.

Scott also had a drive to prove himself worthy, as he felt he didn't deserve the admiration of his daughter Cassie. In fact, Scott was initially unwilling to take up the mantle of Ant-Man from Hank due to his own fears of having used the suit. But upon a chat with the former hero, Scott realized he had a chance to become the hero that his daughter already thought he was.

Ant-Man possessed the normal human strength of a man of his age, height, and build who engaged in moderate regular exercise. At small size, his is compact and at large size are enhanced.