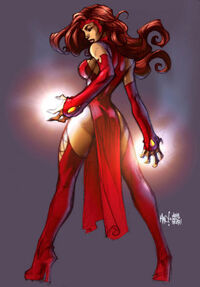 Her history is the exact same as the mainstream continuity other than her life before her first appearance in the comics and the exact nature of her powers.

Wanda was born with her twin brother Pietro on Wundagore Mountain, when their mother, Magda Isabelle Lehnsherr, ran away from their father, Magneto, when she realized he was a mutant. After giving birth, Magda ran out into a blizzard and is assumed to have died. Magneto in this reality was able to follow Magda's trail to Wundagore Mountain to find that she has disappeared, but before she did, she gave birth to twins that were still in the facility. Magneto revealed to the people at the facility that he was the husband of Magda, and that the twins were his children. They gave him both Wanda and Pietro, and he then left. Erik then decided that he didn't have the time to raise the children himself, so he found a gypsy couple who were looking to have children of their own, but they were never able to have any children. He asked if they would like to raise his children, and they excitedly accepted. Before he left, he said that if they ever had anything odd happen to them around the age of puberty that they should contact him, and he would be able to help. Django and Marya Maximoff didn't understand what he meant by this at the time, but they took a special communicator from him, and said they would contact him if anything odd came up. Twelve years passed when the twins began to show signs of their mutant powers, and after a year, the community began to become frightened of the twins. The twins were raised believing that they weren't adopted, and they learned many morals from their adoptive parents that would help influence their decisions in the future. When Django and Marya believed that they needed Magneto's help they finally contacted him saying that the twins were showing signs of weird powers. Magneto said that he would come immediately. The night when Magneto arrived, he found Wanda and Pietro under attack by an angry mob. Erik was able to subdue the mob and save the twins. In the riot, Wanda's adoptive parents were killed. Magneto told the twins to come with him and that they would be safe. Wanda felt that it was her duty to go with him, since he had saved her life. When the twins arrived at Magneto's base, he revealed to them that they were mutants just like he was, and that he was their father. The twins believed him because before their adoptive parents died, they revealed to Wanda and Pietro that they were adopted, and a man named Magneto would go to them and he would reveal to them the truth. The twins did feel like they lost their real parents in the riot, but they had no where else to go other than to be with their biological father. Magneto then trained them in how to use their powers, and both Wanda and Pietro gained greater control over their powers than their Earth-616 counterparts at their age. Eventually the twins came across the mutant Mimic, who they brought to Magneto to become the next member of the Brotherhood of Mutants. Wanda slowly fell in love with Mimic and the same with him for her. They became very close over the next couple of years. They even started to talk about marriage, but their relationship would come to an abrupt end when the Brotherhood's first mission ended in failure, and Mimic was captured. She wanted to go back to save him, while the Brotherhood was trying to escape, but her father stopped her from doing so. She never forgave her father or herself for what happened to Mimic. Throughout the years, even when Mimic joined the X-Men, and she joined the Avengers and found new love, she always felt a strong bond between Cal and her that never went away.

Ability to alter probability, causing unlikely things to happen or likely things to not happen. She's at the stage of her power where she no longer needs to see an object or use hand gestures, but she uses her vision, hand gestures, words, and mathematical skills to increase her concentration over her powers, so the likely hood of the event she wants to occur, will have a higher chance of being successful. She was able to reach this level and control of powers more quickly then her 616 counterpart because she was trained in her powers, since they manifested, by her father, Magneto.

Initially, the Scarlet Witch had the ability to manipulate probability via her "hexes" (often manifesting physically as "hex spheres" or "hex bolts"). These hexes are relatively short range, and are limited to her line of sight. Casting a hex requires a gesture and concentration on her part, though the gestures are largely a focus for the concentration. Early in her career, her hexes were unconscious on her part, and would be automatically triggered whenever she made a particular gesture, regardless of her intent. These hexes would only manifest "bad luck" effects. She later gained enough control over her powers that her powers only work when she wants them to, and they are not limited to negative effects. She can use her hexes to combust flammable objects, contain or remove air from a particular volume, deflect objects, stop the momentum of projectiles, open doors, explode objects, create forcefields and deflect magical attacks. They have been known to alter the molecular composition and physical state of physical objects, negate or distort physical laws, and to cause various forms of energy to spontaneously appear or disappear. She has an affinity with natural elements and phenomena, stemming largely from her magical training under Agatha Harkness, and has trained often at using her hexes to deflect projectiles or to cause enemies to stumble or otherwise suffer the effects of "bad luck"

Ability to psionically tap and manipulate an unknown form of energy for various effects. Her ability to wield energy seems to be infinite.

Blessed by Chthon to have the ability to access his chaos magic, Wanda is able to cast spells like those of Dr. Strange. She was trained in some use of this magic by the fellow magic user, Agatha Harkness, but Wanda only learned enough magic training to use tha magic to increase the power, effect, and successful chance of her mutant power of altering probability.

The Scarlet Witch possesses the normal human strength of a woman of her age, height, and build who engages in moderate regular exercise.

Retrieved from "https://marvelcomicsfanon.fandom.com/wiki/Scarlet_Witch_(Earth-1992)?oldid=26546"
Community content is available under CC-BY-SA unless otherwise noted.