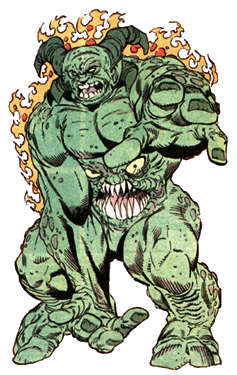 Satannish is one of the more powerful demons that the Earth has known. He was created by Dormammu, despite Dr. Strange, Clea and the Young Avengers' attempts to stop him. Satannish lives in the Dark Dimension, together with his "father" Dormammu.

Satannish was summoned by Locksmith in an attempt to make both him and Tick Tock more powerful. However, Locksmith wasn't able to withstand the scorch trial and perished, while Tick Tock was gifted the power of chronokinesis.

The Sorcerer Supreme of Earth, Doctor Strange, could invoke to Satannish by means of enchantment, but Strange prefers not to do it since Satannish is too powerful.

Satannish is one of the most powerful known demons, seemingly second only to Mephisto, and is a Class Two Demon. He possess great mystical powers that allow to open portals, to send mystical rays him, to create mystical barriers and other multiple abilities.

Retrieved from "https://marvelcomicsfanon.fandom.com/wiki/Satannish_(Earth-1010)?oldid=159734"
Community content is available under CC-BY-SA unless otherwise noted.