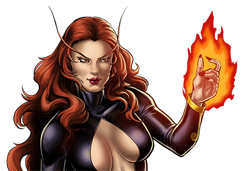 Satana Hellstrom was born to a devil-worshipping cult in rural Massachusetts like her brother, Daimon, being her father Satan in human form. Unlike her brother, Satana embraced her demonic parentage and became trained in the black arts by her father's demonic subjects.

Known Powers: Satana is a succubus.

Satana has some knowledge of magic.

Retrieved from "https://marvelcomicsfanon.fandom.com/wiki/Satana_Hellstrom_(Earth-1010)?oldid=145435"
Community content is available under CC-BY-SA unless otherwise noted.