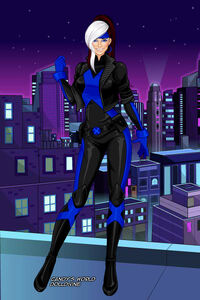 With every strength, toughness and courage. Like father, like mother and like daughter. Crusader/Sarah Rogers is an excellent example of it. As the daughter of Steve Rogers, Captain America, and Rogue also the younger half-sister of Magnus. Sarah is apparently as strong as her mother is (Mostly inherited the powers from her mother) Sarah has the shield that her father passed down to her before the ultimate battle.

Mostly inherited from her mother:

Retrieved from "https://marvelcomicsfanon.fandom.com/wiki/Sarah_Rogers_(Earth-16160)?oldid=233654"
Community content is available under CC-BY-SA unless otherwise noted.