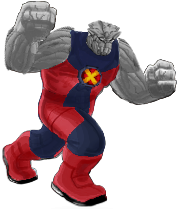 I'm Rockslide, and I can't be scared or killed. If you go crazy evil or something, I'm the one that's going to take you out.

Santo Vaccarro was sent to the Xavier's School for Gifted Youngsters where he befriended Anole, and was put in the New Mutants team.

Rockslide was considered a General Threat by the O*N*E

Retrieved from "https://marvelcomicsfanon.fandom.com/wiki/Santo_Vaccarro_(Earth-1010)?oldid=148039"
Community content is available under CC-BY-SA unless otherwise noted.