Start a Wiki
"Sandy Creeps" is the thirteenth episode of Assemble!'s Season Four and the eighty-sixth episode overall.

-Parker! You brought me pictures of Spider-Man killing the Rhino’s wife, didn’t you? - J.J.J. smiled widely.

-Actually… I wanted to talk about that. - Peter looked down. -That article about Spider-Man killing someone… That could not be true. -

-I told him, Peter. - Robbie Robertson shrugged, with his arms crossed over his chest. -But you know him. -

-HE IS A MENACE ROBERTSON! - J. Jonah shook his head and threw his arms in the air.

-I didn’t know someone else in this office thought that too, but apparently some guy named Edward Brock… -

-I am Edward Brock. - A voice spoke behind Peter’s back. Once he turned around he was face to face with a blonde, tall, muscular man. -Do you have any problem with the article I wrote? -

-Yes… Actually, I think it was biased. You don’t have any proof! -

-A MAN WAS RUNNING LIKE A MANIAC IN A RHINO SUIT! WHAT ELSE DO YOU NEED AS PROOF?! -

-In fact, there’s more proof, Mr. Jameson. The N.Y.P.D. found web fluid in two men, together with this man’s wife, Oksana Sytsevich. - Eddie Brock tossed the pictures on the table.

-SEE?! TOLD YOU! HE IS A MENACE! - Jonah Jameson exclaimed.

-Robbie…? - Peter looked at the Editor-in-Chief but he shook his head.

-They actually have some proof it was Spider-Man. -

-I’m sorry but he has actually been a jerk when I tried to photograph him. - Brock looked down at Parker sternly. -So I’m with Mr. Jameson on this one. -

-What did he do? - Peter asked, trying not to lose his cool.

-When he went black for awhile… Well… He shot his web fluid at my camera… And that was everything I had back then. I was trying to sell the pictures to the Daily Bugle. Thankfully, I could still keep the camera’s memory and I could still get the pictures printed. -

-But I didn-I mean, he didn’t do it… He couldn’t have done it… - Peter looked down, shaking his head, walking out of the office.

-Are you ok, Peter? - Betty Brant asked, looking at the young man.

-Don’t worry, Betty… I’m ok. - He said before getting in the elevator.

-Look, I think you’re worrying too much about this. - Ava said, looking at Peter. -We should go have fun, just us five. Like the old times. -

-Well, I’m in. - Sam shrugged, looking at his friends.

-How about the beach? - Ava smiled.

-No no no… He just doesn’t know he lent it to me. It’s very different. - Parker shrugged.

-We’re here. - Sam said, opening the backdoor of the Quinjet and the five teenagers walked out.

Sam, Danny and Luke started playing volleyball, as Ava set her chair up and sat down, reading a book.

Peter walked to her and took the book away from her. -Really? A shirtless Thor? -

Peter rolled his eyes and felt himself being observed, but after having a quick glance around, he ignored it and sat on the sand next to Ava. While playing volleyball, Cage bursted the ball, ending the game for the boys.

-RACE TO THE WATER!!! - Samuel exclaimed, running towards the ocean. Peter stood up and ran after him, beating them all. -See? This was way too easy guys. You cannot beat Spider-Man! -

However, he realized his friends weren’t in the water but were still on the shore. Parker walked to them.

-Guys, I know I’m really fast but you could’ve at least tried… - Peter stopped talking when he saw the young man in the striped shirt standing in front of them.

-Who are you? - Cage asked, stepping up.

-My birth name doesn’t matter. Yours don’t either… All you gotta know is that you’re the first victims of the Sandman!!! - The guy exclaimed, turning his right arm into a sand fist and then his whole body.

Sam walked to Ava and nudged her arm. -Well, we could’ve just found your boyfriend. -

She gave him a killer look and the five heroes got in costume, ready to battle the villain.

-You really suck as a villain, you know? - Spider-Man chuckled, trying to kick the Sandman. -You chose Spider-Man as your first victim? -

-And Nova… - Sam added, firing a blast at the man.

-And Power Man! - Cage tried to punch him, but his fist just passed through the sand.

-And White Tiger and Iron Fist, yes, we got it! - White Tiger exclaimed, trying to scratch the man.

Sandman gathered all the sand he could and attacked the heroes, burying them under many layers of sand.

Once they got out, the young man was gone. The five heroes decided to go home and be aware of any potential danger regarding the Sandman.

When Peter got home, he found his Aunt May watching the news, which reported a man made of sand was attacking the city.

-Peter, you just got home, where are you going? - May asked, looking up at his niece.

-It’s some group work, Aunt May… And it’s due tomorrow! -

-Professor Warren wants to collect them tomorrow… He says… He says he wants to make sure we don’t do the whole stuff Sunday night. -

-I’ve heard so. - Peter said, running away from the house and getting his phone out of his pocket.

-SPIDER-MAN!!! STOP NOW AND YOU MAY MAKE IT ALIVE! - The monster yelled.

-I wish I was scared of you. - Peter shook his head and got inside a building. Sandman followed him, but he had to go back to human form to fit.

-How old are you? You look young! Why are you doing this? - Spider-Man asked.

-I am 20 years old… And why wouldn’t I?! - The guy replied, punching the wall-crawler with his sand fists. -This is lots of fun! -

Spider-Man kicked the villain on the chest and Sandman fled to Grand Central Station, holding some passengers hostage. The hero went to face him but didn’t try to attack him. Instead he just kept on dodging his attacks and making him run around. Once they were close enough to the door, Spider-Man stopped.

Gwen Stacy walked inside the Station, carrying a firefighter’s hose and sprayed water on the villain, making him solid.

The man went back to human form and looked up at Spider-Man and Gwen.

-I’m sorry, Spider-Man… I… I just was in the wrong place at the wrong time… And they experimented on me and turned me into this. And I just thought being a villain was more fun… And more… Relieving… -

-Look… Sandman… - The wall-crawler put an arm on his shoulder.

-Look, Flint Marko… This isn’t fun. People can get hurt… And what do you earn in exchange? A label? Being put in jail? This isn’t worth it… Just… Go. I won’t hand you to the cops this time. But I hope you start doing good with your powers. Like someone I really loved once told me… ‘with great power, comes great responsibility’”. -

-Thank you, Spider-Man… - He said, turning into sand and leaving the building.

After cleaning the sand which was left on their clothes, both Peter and Gwen headed back to Aunt May’s house for dinner. But when the door opened, a redheaded young woman was standing, smiling at the couple.

-Oh, Peter, this is Mary Jane Watson, Esther’s granddaughter! - Aunt May exclaimed from behind and holding Mary Jane’s shoulders.

-She has recently moved to the city and guess what? She’s going to your school! - May smiled.

-It’s late and I guess I must head home… - Gwen shrugged, looking down.

-Yes, Gwen. - Aunt May smiled. -Mary Jane has an incredible story to tell us, right? She saw Spider-Man fight that sand monster at Grand Central! -

-I guess I can’t miss out on that. - Stacy smiled, faking enthusiasm.

"Parker! You brought me pictures of Spider-Man killing the Rhino’s wife, didn’t you?"

"See? This was way too easy guys. You cannot beat Spider-Man!"

"Guys, I know I’m really fast but you could’ve at least tried…" 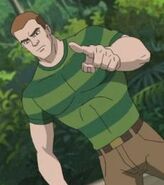 "My birth name doesn’t matter. Yours don’t either…"

"All you gotta know is that you’re the first victims of the Sandman!!!"

"My name is Flint Marko…"

"Oh, Peter, this is Mary Jane Watson, Esther’s granddaughter!"
Add a photo to this gallery

Retrieved from "https://marvelcomicsfanon.fandom.com/wiki/Sandy_Creeps_(A!)?oldid=104801"
Community content is available under CC-BY-SA unless otherwise noted.