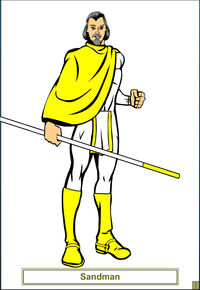 The Sandman was born with the name Amir, in ancient Babylon. He was a prince and would have prophetic dreams about future events, and accessing the Dream Plane, the world people go to when they fall asleep. Eventually he had a vision of a bright light that told him to become the king of dreams, and Amir accepted. He was then given the name of the Sandman. He now rules the Dream Plane. Throughout the ages he has appointed people to act as Dream Warriors, warriors who could fight Dream Demons, abominations that exist for the sole purpose of tormenting those from the real world.

He eventually fell in love with the princess Selena from England during the renaissance, meeting her when he helped her to sleep. Selena fell in love with him, so the Sandman asked if she would come to the Dream Plane with him and she accepts. In the Dream Plane hey conceive a son, who is named Suppressio. Eventually Selena was killed by the lord of nightmares Nocturno, making the Sandman depressed. He trained Suppressio to be the next king of dreams, but Suppressio saw that it seemed that nothing he did would please his father so he ran away to the Nightmare Zone, overthrew Nocturno, and then bonded with the DarkCrystal, making himself the ruler of the Nightmare Zone. Now he and his father are in a constant war as Suppressio wants to expand his kingdom into the rest of the Dream Plane, and the real world!

The Sandman has powerful mystical abilities that are at most power while on the Dream Plane.

Retrieved from "https://marvelcomicsfanon.fandom.com/wiki/Sandman_(Earth-616)?oldid=255942"
Community content is available under CC-BY-SA unless otherwise noted.