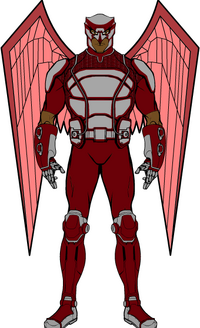 The skies are my domain.

Samuel Wilson Junior was born to Falcon and an unknown woman, who Sam met during the waning days of the Age of Heroes. Unfortunately, Sam Junior would never get the chance to know his mother who died during childbirth due to complications. Though saddened by the loss, Sam Senior still raised his son on his own, once more living in Harlem while deciding to take a break from the hero business.

His life for the first seven years was normal, going to school and having to learn some of the dangers in his neighborhood. Eventually though, his father decided to start training Junior in martial arts and acrobatics, hoping he could learn to defend himself. But just defending himself came out of the question when SHIELD approached the Wilson Family and convinced Falcon to have his son join the Junior Agents Program to which Senior reluctantly agreed. It was during the first few days there that Junior became instant friends with Lucas Rodgers and Kaitlyn Carter, the latter of who he would develop a crush.

As Junior got old however, he began to seek new desires, such as becoming a hero like his own father. But it would be at thirteen that Sam Junior came to realize his father did not want his son following in his foot steps. Feeling the time as heroes was over, Sam Senior had hoped his son would be satisfied with being a simple field agent for SHIELD. Such a realization caused a rift between father and son, even to the point Sam Junior made a request for armor to be made for him. It would take two years before this was complete and Sam Junior in the meantime became a mediator between his friends when they discovered their family connection.

If that wasn't enough Junior's and Senior's relationship didn't improve by much as their training continued. They argued and bickered about Junior's goals but the younger Wilson refused to listen to his father.

Things came to a head when Sam Junior finally was given the Falcon Armor, just before he was to turn sixteen. By this time, Sam Junior wasn't afraid to reveal what he had requested and the discovery of the armor by his father was about the final straw for Senior. Thus, Sam Junior took up the mantle as the next Falcon, least for a short time when he began protecting Harlem and continuing his training.

But shortly after he did turn sixteen, Sam got word of the Avengers Academy and traveled to Los Angeles. Enrolling himself into the Academy he was put under the Alpha training squad with his friends and decided to take the new mantle of Red Wing in honor of his father's deceased bird companion.

Sam is capable of lifting the maximum weight a man his age, height, and weight can.

Retrieved from "https://marvelcomicsfanon.fandom.com/wiki/Samuel_Wilson_Junior_(Earth-7194)?oldid=155075"
Community content is available under CC-BY-SA unless otherwise noted.