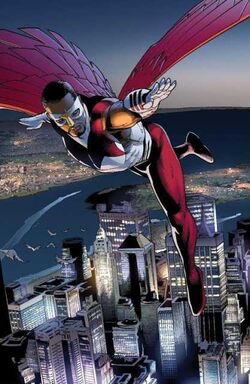 I've only ever been Cap's man. But it's apparent he's moving on. And so should I.

Falcon's history is the same as that of Earth-616's Sam Wilson up until the Marvel NEW! relaunch.

After Luke Cage quit the New Avengers in favor of the New Warriors, he handed the team over to Iron Fist. His first recruit was Falcon. Falcon had temporarily retired from being a superhero to be a cop, but upon hearing of Iron Fist's Avengers, he returned to the gig.

Bird Telepathy: Falcon retains his ability to telepathically communicate with and control birds.

Sam is a martial artist and expert acrobat.

Equipment: Photokinetic Equipment: Sam has the equipment used to fly by creating wings of light. He has extended this to include claws of light, and may be able to develop it further.
Transportation: None known.
Weapons: None known.

Retrieved from "https://marvelcomicsfanon.fandom.com/wiki/Samuel_Wilson_(Marvel_NEW!)?oldid=84240"
Community content is available under CC-BY-SA unless otherwise noted.