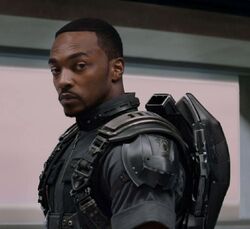 I miss the feeling of being up there, in the sky. I feel like I'm gonna die here.

Sam Wilson was a special ops S.H.I.E.L.D. Agent who used a special wing suit to provide air support for soldiers on the ground. He later assisted in the war against Apocalypse and his forces.

After S.H.I.E.L.D. fell, the Falcon attempted to rendezvous with the Avengers to continue the fight, but he ended up being captured by the Armada and imprisoned in the Sphinx Death Camp.

Stripped of his wing suit, Sam Wilson was placed on death row, alongside several other former superheroes. However, he joined Natasha Romanoff's attempted revolution to escape from the Sphinx.

However, just as they began to gain traction, news of Mister Sinister's death spread to the death camps. The Archangel then took matters into his own hands and ordered mass extermination of the prisoners, and Sam Wilson was one of many who were forcibly led into a Terrigenesis chamber and died from exposure, due to lacking Inhuman DNA.

Retrieved from "https://marvelcomicsfanon.fandom.com/wiki/Samuel_Wilson_(Earth-9999)?oldid=245739"
Community content is available under CC-BY-SA unless otherwise noted.