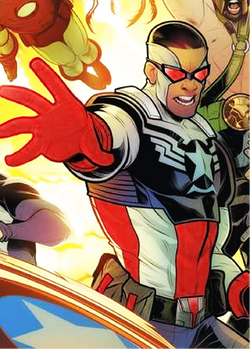 Education = College-level education
Origin
Origin
Former US Army soldier. After his discharge, Sam was offered to join S.H.I.E.L.D. by Nick Fury, where he met his future husband, Steve Rogers. He soon leaves S.H.I.E.L.D. in favor of the Avengers and becomes Falcon.
Place of Birth
San Diego, California, USA
Creators

Reach for the skies.

Samuel Thomas Antoine Wilson was born to Darlene and Jefferson Wilson in San Diego, California. He is the eldest of four children, having younger twin siblings Sara and Gideon and baby brother Tommy, who will later be known as Thunderbird. Sam has shown to be the type of brother any younger sibling needs -- for starters, he is very protective of his siblings especially Tommy since he is the youngest. Also, he takes responsiblity in taking care of the family as well as making his education his top priority. Once he graduated high school, he began to enlist in the US Army due to him wanting to serve the country, and had spent four years as a soldier before being discharged.

After his discharge from the Army, Sam was offered to become part of S.H.I.E.L.D. by Nick Fury and Sam eagerly agrees. With his experience and discipline from the Army, Sam had put his energy and dedication to become one of the S.H.I.E.L.D.'s greatest agents, helping them fight criminal organizations they face. The people of S.H.I.E.L.D. were highly impressed with Sam's focus and hard work, he became popular in the organization, some of the other guys being slightly jealous, even though Sam doesn't mind a bit. As his years in S.H.I.E.L.D. were going well, his life in the organization started to change for the better good.

One day, Sam was busy training with colleagues until Fury approaches him to introduce Steven "Steve" Rogers who is known as Captain America. Sam was a fan of the patriotic hero and soon he develops an unlikely friendship with Steve. As their relationship starts to become close, Sam realizes that Steve has already developed romantic feelings for him, and Sam was exactly the same about the Captain. After Steve confesses his feelings to him, Sam returns the favor and the two share their first kiss, igniting their romantic relationship. Inside and outside of S.H.I.E.L.D., Sam had spent his moments with Steve and even trained with him if not going on dates with him. It was love at first sight for him and Sam really wasn't expecting a hero like Steve to fall for him after meeting for the first time.

After spending three years in S.H.I.E.L.D., Sam believed it was time for him to leave the organization. As a form of a send-off, Sam teams up with Steve who gears up as Captain America and leaves the organization to fight the H.Y.D.R.A. after discovering Red Skull's return. Along the way, they meet Antonio "Tony" Stark aka Iron Man, who they help fend off Red Skull before his retreat. After their teamwork together, Sam becomes part of the Avengers with Steve and Tony as the leaders of the team. Sam soon gains a new costume and a new hero name, Falcon thanks to Captain America. He would help both Steve and Tony recruit other heroes such as The Hulk, Thor Odinson, Black Widow, Vision and others. As the Avengers were formed, Falcon would fight along with his new teammates to take on the H.Y.D.R.A. until he, Steve, and Tony discover web-slinging hero Spider-Man who skyrocketed to international fame and recruited him as the newest addition to the Avengers.

As Sam's activeness in the Avengers began to rise in progress, he gains a new suit after his first costume was damaged, strongly resembling Captain America's suit, and he would be promoted to second-in-command under Tony's honor. At the same time, Sam's goal as a hero has reached to achievement for his family was already proud of him for his hard work and his siblings, even Tommy has already looked up to him. Lastly, to make things better for him, Steve proposes to him after a mission and all of the Avengers gathered up to congratulate him on his engagement.

In the later years, Sam marries Steve, their wedding taking place at Central Park where he former S.H.I.E.L.D. colleagues and Nick Fury attended. He would, later on, congratulate Tony and Peter for their engagement after the billionaire proposed to the wallcrawler.

Retrieved from "https://marvelcomicsfanon.fandom.com/wiki/Samuel_Wilson_(Earth-7090)?oldid=257202"
Community content is available under CC-BY-SA unless otherwise noted.