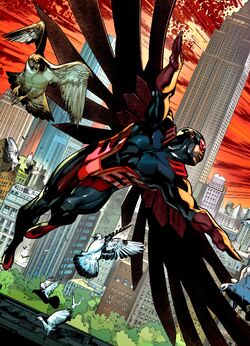 Samuel Thomas "Sam" Wilson was a former United States Air Force pararescue airman in the late 90s, who eventually left active duty when his wing-man Riley was brutally killed in combat during their mission, choosing instead to begin helping any of his fellow veterans who were suffering from post-traumatic stress disorder at Veterans Affairs in Washington D.C. when he first transferred there with his attempt to have a fresh start in his new civilian life.

During this time, Wilson met and soon became an ally of the heroic legend himself, Captain America during the events leading to the Hydra Uprising, willingly assisting him in bringing down Alexander Pierce and the rest of Hydra supreme's diabolical schemes for Project Insight before then choosing to remain with Captain America for future missions, specifically regarding any potential missions against Hydra.

Search for the Winter Soldier

Having to break the encrypted files of Barnes' information as the Winter Soldier, thanks to one of S.H.I.E.L.D.'s known anonymous unaffiliated information breakers, Microchip. Decrypting the classified Winter Soldier files, Captain Rogers and Wilson finally began their search for Barnes starting with Ideal Federal Savings Bank, the recent Hydra facility that previously contained Barnes. With their know information finally come in handy, and interrogated every single living member who were involved in the program since the aftermath of Hydra Uprising, eventually leading their final location, which was an abandoned Hydra facility, located in Siberia.

Unfortunately, Rogers and Wilson never found any signs of Barnes' presence, only to find themselves falling in a trap that was set by a strange man who've ran the facility since the days of the Cold War, besides Zola. The criminal mastermind then showed his presence to the two heroes, introducing himself to be Johann Fennhoff, a retired psychiatrist who was one of the notorious superiors of the Hydra's High Council and also helped Zola in the Winter Soldier Program through the usage of his greatest accomplished brainwashing technique, the "Faustus" method. Answering Rogers' question, Fennhoff reveals that Barnes was not in the facility at the time, telling Rogers that Barnes himself wanted to find out more about his forgotten past as he tries recovering from being the Winter Soldier and his unwilling allegiance to Hydra, on his own.

As Fennhoff had attempted to escape the abandoned facility and leave both Rogers and Wilson to die fighting the five Winter Soldiers, he unexpectedly finds himself outside the base, hostilely surrounded by the agents of S.H.I.E.L.D.'s newly-founded, second incarnation. Having no other choice to seal Hydra's legacy into his grave, Fennhoff tried taking a cyanide pill as he shows his loyalty to to the organization, but one agent manages firing a tranquilizer at Fennhoff's neck by the last second, dropping the pill even before he could have put it on his mouth, with another agent even commenting that he's had enough with the suicide pills.

Fennhoff was then unconsciously cuffed and arrested by the agents, followed by some of the operatives trying to open the sealed entrance of the facility. It took the operatives a while trying to break before immediately entering the base to find Rogers and Wilson. Although they were able to find the two with the intention of rescuing them notorious super-soldiers, it was also revealed that the two has weren't so helpless at all, showing that they were able to successful handle all five of the Winter Soldiers and tackle them down in the process of the battle.

Fennhoff was taken into the custody of S.H.I.E.L.D. afterwards, along with the Winter Soldiers, whom according to the organization, had decided to keep the five remained frozen in a cryogenic state, while they continue to find a solution until they'll be able to cure their mind's from Hydra's mental programming caused by Fennhoff's infamous Faustus method.

While the Avengers brought down the remains of Hydra, Falcon assisted Captain America and the rest of the Earth's Mightiest Heroes in his search for Bucky Barnes since his disappearance after the exposure and apparent fall of Hydra, in order to try and save him from the brainwashing which turned him into an assassin. Using information provided by the new Director Phil Coulson during their previous attack on the Arctic Hydra Research Facility, S.H.I.E.L.D. agent Maria Hill helped the Avengers locate the base and launch an assault on the next other head of Hydra remaining after Fennhoff's arrest, Baron Wolfgang von Strucker.

Aside from eliminating the remaining Hydra bases, Falcon would also participate in helping the Avengers on their great battle against the unhinged and megalomaniacal A.I. Ultron, who turned against his former allies in his conquest to exterminate humanity and purify the planet through his technological singularity, in which they eventually defeated the machine of destruction, apparently destroying Ultron in their final confrontation.

The Movement Alliance conducted a series of massive terrorist attacks all over the world destroying several famous and sacred landmarks across the globe, killing over 1,500 people on the very first day of their worldwide assault. Consequently, all the Movement's opposing adversaries, the heroes, were united into creating their own Ultimate Alliance, in order to stop and prevent the Movement from commencing its schemes upon world domination and authoritarian rule, before its too late.

Whereas in this case, the rest of the Avengers faction handles the threat ongoing at the cities of New York, in which Wilson assisted Black Widow and several other S.H.I.E.L.D. agents to protect selected secured areas from Crossbones' murderous Hydra team in causing too much wreckage in many homes and settlements and killing too many innocent civilians, with the main objective of preventing them from ever reaching the rest of the authoritatively-guarded cities in New York, aside from New York City itself.

During Sam's duel with Crossbones in the final battle of Albany, Rumlow was able to successfully aim his modified and advanced sniper rifle at the EXO-7 Falcon as he flies towards him, permanently damaging the synthetic wings in the process, disabling his ability to fly out of safety furthermore. Realizing that he was already surrounded by dozens terrorist operatives, Sam had no other choice but to get to a cover by hiding behind a large but fragile debris, although the latter wouldn't last any longer until they would break through it.

As he humorously talks some sense towards Rumlow in order to gain courage in handling the, Sam accidentally activated something from his already damaged suit, summoning the Redwing Drone, much to Sam's surprise that it was still "alive" at the moment. After immediately discovering this miracle, Sam ordered Redwing to distract the majority of the operatives, as he confronts Crossbones alone, one more time. During the final duel between good and evil, Sam was almost heavily wounded, though he finally managed to take down Rumlow with several blows to his face before disappearing into retreat, carelessly leaving his own men to be apprehended to the S.H.I.E.L.D. agents.

Retrieved from "https://marvelcomicsfanon.fandom.com/wiki/Samuel_Wilson_(Earth-61615)?oldid=254577"
Community content is available under CC-BY-SA unless otherwise noted.