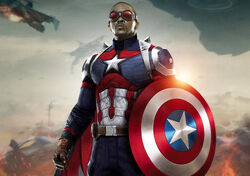 Earth-201
Base Of Operations
The Outside
Characteristics
Gender

He was my idol for as long as I can remember. And then he tarnished everything I stood for. I couldn't let that be in vain.

After joining the Avengers, Falcon worked closely with Captain America, and the two became good friends. This resulted in Sam being blindsided when Captain America revealed his true nature as a double agent working for Hydra, who made his play for complete world domination. Sending the remaining Avengers into hiding underground, Sam took up the mantle of Captain America in order for it to still stand for truth and justice.

He went on a good few missions with the Outsiders before being forced to do battle against the Renegades so that the Outsider could consolidate the teams. Unfortunately, Captain America would end up being the first casualty on the Outsiders' team after being skewered by Doctor Doom.

Retrieved from "https://marvelcomicsfanon.fandom.com/wiki/Samuel_Wilson_(Earth-201)?oldid=244615"
Community content is available under CC-BY-SA unless otherwise noted.