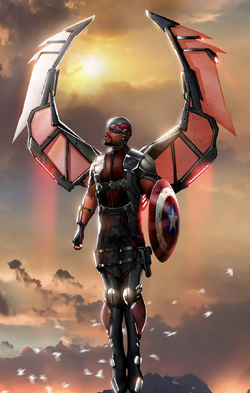 It's okay to stare at the wings. Everyone else does.

Sam Wilson is a former Air Force Pilot who was recruited by Potts International after he tested positive for Inhuman DNA. He was put through Terrigenesis and emerged with a large set of metallic wings. The marketing team dubbed him "Archangel" and instantly began using him to promote religion, as Churches across America quickly became his biggest sponsors.

Retrieved from "https://marvelcomicsfanon.fandom.com/wiki/Samuel_Wilson_(Earth-1515)?oldid=245083"
Community content is available under CC-BY-SA unless otherwise noted.