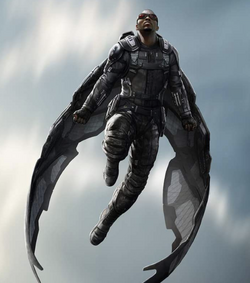 I'm the smoldering eyes in the sky.

Sam Thomas was one of the best pilots the US Air Force had ever seen. Eventually, he and his wingman, Reilly Marshall, were selected for a top secret project with the experimental EXO-FALCON suit. Sam and Reilly both took to it like naturals, and were quickly utilized by the Air Force for off the books black ops missions.

The two of them felt like they could fly side by side for the rest of their lives, until one fateful mission when Reilly was shot out of the sky by the opposition. Horrified, Sam abandoned the project and went into hiding, going by the alias of Sam Wilson, and burying the Falcon suit in his backyard.

One day, Sam met Captain America in a chance encounter, and became inspired by everything he represented. Sam wanted to be doing good again, and started following the exploits of Captain America and the Avengers. Eventually, the day came when they were battling the large robot Ultimo in a city close to him. Sam suited up and flew into battle, waiting for the perfect strategic moment to save Captain America's life.

It took some convincing, but the Avengers came to see that the Falcon could prove a valuable asset to the team. Since joining, he has become extremely close friends with Captain America, Black Widow, Hawkeye, Ant-Man, and War Machine.

However, not long after he made his public debut as the Avenger, Falcon, he was put on trial by the US Military for desertion and theft of the Falcon suit. He was represented in court by the Avengers's personal lawyer and cousin of the Hulk, Jennifer Walters. After a lengthy trial, Sam was deemed not guilty and given an official authorization to act alongside the Avengers.

Retrieved from "https://marvelcomicsfanon.fandom.com/wiki/Samuel_Thomas_(Earth-101)?oldid=249067"
Community content is available under CC-BY-SA unless otherwise noted.