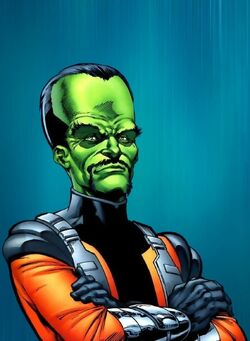 Earth-61615
Base Of Operations
Mobile; formerly imprisoned at The Raft
Characteristics
Gender

I see my future unfolding. It is an illustrious future defined by power and influence. A future that begins this very instant...

Samuel Sterns is a cellular biologist and Grayburn College professor who was finding a cure for Bruce Banner. When he was affected by Banner's blood on his head's open wound, his mind suffered a rapid mutation, greatly increasing his mental abilities, later turning him into the Gamma-powered super-villain known as the Leader.

Sterns' mutation went wild, and his brain power incremented exponentially, increasing his mutation and enlarging his cranium even more, driving him more insane. Abandoning his true human name, Sterns instead began to refer to himself as the Leader. Over the course of a year, he used his heightened intellect to become a criminal mastermind, and he developed an extensive spy ring with plans of taking control of the United States Government.

His efforts soon earned him the attention of his former ally Bruce Banner, also known as the Incredible Hulk, clashing with him on numerous occasions. He was later captured by S.H.I.E.L.D. several times after his defeats but was freed by HYDRA and sent to work with their special unit division known as the Intelligencia to continue his research into creating gamma-powered soldiers and battle S.H.I.E.L.D., Avengers, and many other superheroes and supervillains who would oppose their plans of world domination.

Eventually the Intelligencia became an independent but a secret criminal semi-organization months after the Ultimate War has finally ended. At some point, the Leader begins to recruit other supervillains of genius intellect in order to combat their foes. Together they plan to restore the information of the Library of Alexandria by stealing the info from various sources across the world.

At one point, he was attempted to be assassinated by the mercenary Taskmaster while he was inside a classified and abandoned A.I.M. laboratory, collecting various information about the expanded history of the terrorist organization. He was attacked by the mercenary but failed after he was shot by the superweapon he was secretly holding.

Taskmaster manages to escape the scene, leaving a trail of blood inside the area of the lab. Sterns collected the samples of his blood and examined it, with the conclusion of thinking it might be usable into creating a new army of super-soldiers for Hydra, capable of copying the fighting moves of their opponents. After revealing that Taskmaster was a former A.I.M. agent turned S.H.I.E.L.D., Samuel planned a tactic that would cause for A.I.M. to turn on S.H.I.E.L.D. once again. He decided to create a serum from Taskmaster's blood that he used for himself so he can gain his powers and abilities of combat mimicry as well.

He injected the new serum on himself and began training before he became a fully trained combatant. Eventually he had created a new identity by the name of "Burt Kenyon," where he used advanced technology to craft a new face that he used with the Photostatic Veil, which is also known as a Nano Mask, in order to trick his foes into thinking that this mercenary is a "newcomer."

Finally, he used his newly-gained skills to become the newest highly-skilled mercenary known as the Hitman and began his journey eliminating the most skilled mercenaries in the entire country that A.I.M. could have ever offer, so he can frame Taskmaster and S.H.I.E.L.D. for being responsible in the every assault that he'll plan to do as an act of revenge. As the Hitman, Samuel had neutralized most of the most elite mercenaries and several agents who were members of A.I.M., and as a result the organization became angry and searched and have concluded that the only person who can do this sort of ability is a former member of A.I.M., and the best one that they could match is Taskmaster, who is now a S.H.I.E.L.D. agent.

The Leader's plans was closest from working until Taskmaster gathered help from his currently-joined organization S.H.I.E.L.D., revealing that he wasn't really the one who were responsible for the killings and someone else was doing the assassinations and was framing him so A.I.M. can attack S.H.I.E.L.D. for the last time. During A.I.M.'s assault in the Playground, Hitman was watching in a vantage point in the area where no one can see him, so that he could watch the attack. He was entertained and was still watching when the area was infiltrated by the armed forces of the criminal organization, battling S.H.I.E.L.D. agents who were defending the facility, until he was ambushed by Taskmaster, leading into a fight between them.

With Sam's genius tactics plus Taskmaster's DNA inside his system, he outmatches Taskmaster at first until his powers fully unleashed, mimicking every move that Samuel had from earlier to now, successfully beating him to a pulp. Taskmaster approaches a weakened Hitman until he drops a smoke grenade, vanishing from the scene. Though he dropped a dog tag covered in blood (in actuality it was the blood of "Burt Kenyon," which had been artificially made by Sterns himself), causing for Taskmaster to think that he dropped it accidentally, but little did he know, it was all part of Stern's plan.

After knowing Hitman's "true identity," S.H.I.E.L.D. agents led by Phil Coulson's Team was sent to investigate the location in which they have tracked Kenyon in his apartment. The team searched and inspected the area in searching for Kenyon, but he wasn't found anywhere. They kept on searching until an agent found a phone beeping in the bedroom. Before picking it up, Coulson (who realized that this was all a set-up) tried to stop him but it was too late after the agent picked it up, triggering the bomb contained inside the phone, blowing up the entire room, killing most of the agents. Only Coulson and a few agents had survived the following destruction before they were approached by Burt Kenyon, who was just arriving at the apartment.

Coulson chases a fleeing Kenyon, chasing him 'till they reach through the roof of the building before Phil manages to tackle Kenyon. They fought for a while until Coulson grabs his pistol and shoots Kenyon on the chest, seemingly killing him. Coulson approaches the body but as he leaves, his leg was grappled by Kenyon, revealing his survival. Kenyon smashes Coulson to the ground, and when he was about to stab Coulson, he was shot repeatedly by Alphonso Mackenzie from behind with his rifle and Melinda May using her pistol, along with Daisy who helped Phil rise up.

After Kenyon's "death," it was revealed that Kenyon isn't a human at all but it was a Life-Model Decoy built by someone else. Coulson's Team was suddenly ambushed by Hydra forces led by a fully-suited Hitman, shooting all of the members, except for Mack, May, and Phil leaving them outnumbered.

The Leader was about to exterminate Coulson and the remainder of the team, until several S.H.I.E.L.D. forces led by Director Jeffrey Mace along with Quake, Hawkeye, and Deathlok have arrived, saving them from the forces of Hydra. The Hitman tries to escape the battle between two organizations, but was stopped by Taskmaster. They battle it out once again and but unlike the last time, Hitman's skills was more improvised that Taskmaster can't even copy his moves until Taskmaster manages to counteract Hitman's advances with his own and got the chance to get a plasma cannon and aimed it at his head shooting his helmet.

Hitman survives but was weakened and his helmet was severely destroyed creating a disfigured opening that shows his face, due to the blast caused by the powerful weapon, revealing his true identity to Taskmaster and the rest of his foes. Leader, who is now revealed as the Hitman all along, pulls out the most powerful weapon he built, a prototype duplicate of the Destroyer and unleashed it on the ground, releasing a powerful shockwave of energy that killed several agents from both sides and injured a few civilians in the town that they were battling out each other.

As a result of his megalomania, he injected more of the enhanced serum, at the cost of enlarging his cranium even further, increasing his insanity towards power and destruction. May, Deathlok, and Taskmaster faces Sterns, while Coulson, Mack, and Daisy fought the Destroyer. They managed to deactivate the automaton while Sterns injected the last remaining sample of the serum on himself, enlarging his cranium in which to the point where his head could unconditionally erupt in any moment due to it's unstable condition.

With all the efforts of May, Deathlok, and Taskmaster, they finally delivered a final blow, defeating an unstable Sterns who was already weakened due to the overdosage of his serum. In the end, Sterns somehow woke up and drops his last smoke grenade, attempting to escape until he was shot at his leg by Hawkeye with a non-lethal arrow using a specialized crossbow, preventing him from ever running away. In his weakened and almost dying state, Sterns was finally apprehended by Jeffrey Mace and held him imprisoned in the Raft.

Before his imprisonment, he went through surgical operations in order to stabilize his cranium to prevent it from ever enlarging. After waking up from a coma in his containment cell days later, he was confronted by Mace and had a conversation, telling him that he would suffer for his criminal actions for the rest of his life unless he tells about Hydras plans, in a nicely and calmly but aggressive way. Sterns remained silent, looking at Mace, proving to stay loyal on Hydra. Due to his quiet response, Mace just welcomes Sterns for saving his life in the end, before leaving the Raft. The Leader then sarcastically thanks Mace as a response before he could leave then grins, telling that a new sense of impending doom is coming soon, and Mace will be one of those to perish. While he was gone, he let his fellow Intellgencia co-leader, the Wizard, lead the team in command instead, long before he was expected to be defeated by his enemies in the process.

Super-Genius Intelligence: After his head was affected by Banner's blood, the Leader has gained superhuman mental acumen and a few superhuman abilities. He possesses enhanced intuition, pattern solving, information storage and retrieval, and logical and philosophical structuring. The potential of his intelligence is nearly unlimited.

Retrieved from "https://marvelcomicsfanon.fandom.com/wiki/Samuel_Sterns_(Earth-61615)?oldid=268047"
Community content is available under CC-BY-SA unless otherwise noted.