Marvel Fanon
Register
Don't have an account?
Sign In
Advertisement
in: Characters, Templated Articles, No Dual Identity,
and 13 more 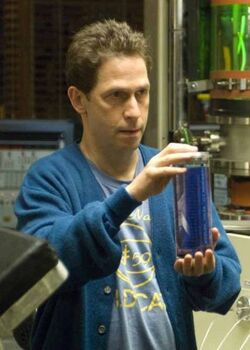 Single
Occupation
Research scientist, cellular biologist, professor
Origin
Origin
After being accidentally infected with a synthesised version of Bruce Banner's blood via an open wound on his forehead, he was mutated into a insane being with deformed skull.
Creators

Sterns was initially a scientific ally to an on-the-run Bruce Banner and they communicated with each other as Mr. Blue and Mr. Green, respectively, while collaborating to find a cure for Banner's condition.

Why are you always hitting people?! Now what could I have possibly done to deserve such aggression?

Upon meeting in the flesh, Dr. Samuel Sterns was shown to be an eccentric man who was infatuated with the potential power of Gamma Radiation. After witnessing Banner transform into the Hulk as a test and successfully reverting him back with their finalized suppressant, it was revealed that he had been experimenting with Banner's blood samples on animal test subjects without his knowledge.

He was physically threatened by Emil Blonsky who desired to be further mutated. Sterns eagerly complied. Once Blonsky mutated, he became insane and proceeded to injure Sterns and demolish his lab. Sterns was accidentally infected with Banner's blood via an open wound on his forehead and his head started expanding as he smiled with joy.

I see my future unfolding. It is an illustrious future defined by power and influence. A future that begins this very instant.

Sterns' mutation went wild, and his brain power incremented exponentially. He was found by Natasha Romanoff, who had a brief dialogue with him, during which Sterns identified Black Widow's birth place from a hint of accent in her voice. Sterns then attempted to bribe her, promising he would help her come back to Stalingrad, but Widow shot him the leg and arrested him.

Sterns was taken into S.H.I.E.L.D.'s custody and referred to as "Project Mr. Blue".

Samuel Sterns is described as an eccentric, ethically challenged, anarchist, hating authority, who doesn't like to answer to anybody which got him into trouble. After the mutation, he showed a more megalomaniac and insane side.