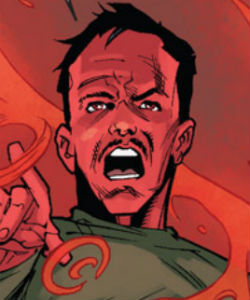 Samuel Sterns was a biology professor at a local college in California. His expertise on gamma radiation and external mutations made him the perfect candidate for Bruce Banner to communicate with while he was on the run.

Sterns had always been fascinated by the Hulk, and was ecstatic at the opportunity to help him. Eventually, when Banner and Betty Ross came to him seeking help to develop a cure, they were followed by Betty’s father, General Ross, and the US military.

During the ensuing chaos, Sterns suffered a head gash, which Banner’s blood would then drip into. Sterns instantly became affected, his brain mutating from the gamma and growing to three times its original size. He was able to escape from the military, and went on to be driven insane by his own intellect.

He would later resurface calling himself the Leader, and acting as an eco-terrorist to blackmail the governments of the world into giving him billions of dollars. This eventually attracted the attention of Bruce Banner, who was now being backed up by the Avengers. They confronted Sterns on his oil rig, where he’d set up shop, and were barely able to take down his army of Hulk imitations.

He was then imprisoned in the Raft, where General Ross insisted he be given treatment to try and reverse the effects the gamma had on his brain. Rather than cure him, it merely shrunk his brain back to normal size while retaining his enhanced intelligence, as well as altering his skin from green to red. Ross was then able to bribe Leader with the offer of early release if he joined the Thunderbolts as their strategist.