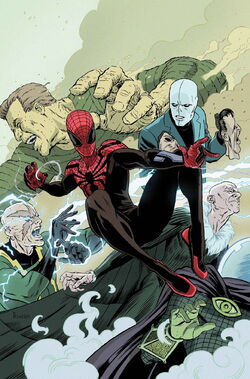 Sam was the son of Peter and Mary Jane Parker in the future of Earth-1315, in that time there were no more superheroes. Sam was raised in a non-violent household, and was raised a good kid

When Sam was Fifteen he was a popular kid in High School but still was a science nerd (Only if Peter lived in these times) because being a science geek was considered awesome in the future. One day when Sam was in school, he was in gym and they were doing basketball and somehow Sam used all of his skills he ran through everyone barging them afar and then Sam realized the ball was stuck to his hands and he couldn't get it off and went for a slam dunk into the hoop but broke the backboard and then the ball fell off his fingers. Sam was shocked and left he then came back home and demanded answers. Peter and MJ decided he was old enough to learn of his heritage. Peter then told Sam that when he was sixteen he became Spider-Man. Sam was shocked at first and Peter said that Sam may of inherited Peter's old powers. He then tried to climb a wall and he achieved it,. Sam then asked his dad if he could be the new Spider-Man. Peter's answer was "No", due to his fear that Sam could be injured in battle. Sam tells him that it's his heritage and he should but Peter ignored him. Sam then went up to his room not caring and said it was his duty to be the next Spider-Man and so Sam donned himself a self-made costume and became the new Spider-Man

Sam became Spider-Man against his fathers orders, and made the news broadcasts out of the roof, everyone had hope again. After stopping an armored car robbery (terribly) and destroyed half of 67th doing it, Peter saw it on the news and when Sam came home late at night, Peter figured it out and Sam said "I know you know I'm Spider-Man, you can ground me for life but you won't stop me from being Spider-Man", Peter said it was fine with him being Spider-Man and if it's what he really wanted, Sam said yes and Peter was happy with that BUT! Peter would have to train Sam after his terrible attempt to stop an armored car robbery. After stopping so many crimes as Spider-Man, the Kingpin of New York (Wilson Fisk's son) funded experiments on petty crooks that Spider-Man had taken to jail to make Animal Themes Super Villains, like The Eagle, Wolfman, Chimpanzee, Doc Croc, The Serpent, Pirahna Man and many more. Sam defeated them all and they all swore revenge becoming Sam's Rogues Gallery. In later months as Spider-Man, an older Doc Ock (Aged 60) would become Sam's greatest enemy.

Meeting his past father

When Peter Parker was fighting Doc Ock and attempting to stop his new scheme which was to team up with his future-self and kill the original Spider-Man, Doc Ock managed to open the portal. Meanwhile in the future, Sam and Old Ock were battling and a portal opened, Old Ock grabbed Sam with his tentacles and threw Sam in the portal (thinking it would kill him) while Sam thought he was going to die he would take Old Ock with him so he webs him and pulls him in the portal. They then appear in the past, with Sam being knocked into Peter and feeling sick Doc Ock gets Peter and Sam and throws them off the building, Peter then spins a web net and saves them both. Peter then asks who he is and why he is wearing a Spider-Man suit, Sam replies and unmasks himself and says "I'm Sam Parker, from the future and I'm...I'm your son" Peter believes him since he fights giant Lizards and electric people everyday so this is nothing, Peter then asks who his mother is and Sam replies Mary Jane Watson, this makes Peter happy and Sam then tells Peter that he must get back to his own time to protect his own people and be home by dinner (jokingly) this made Peter laugh due to his son being a "Wise-ass" like him. The two then go on a little adventure to find the Ock's they find them and battle them. the two then eventually knock out the Ock's, and due to Peter being smarter than Sam, Peter was able to rewire the time machine and send Sam back to the future. Sam then took Old Ock back to the future, Peter then jokingly says "Don't be late to dinner or I won't be happy", Sam then replies "See you dad...Is that weird?" and once again Peter jokingly says "Yes". Sam then runs back to Peter and hugs him saying "I'm gonna miss the cooler you, see you later old man" he then takes Old Ock back into the portal back to his own time period.

In 2039, Sam Parker met with Franklin Richards and was offered a suit better than his original: more loose, a night vision mask, a special wrist device and much more.

One day while on patrol, Sam was attacked by his father's old nemesis, Venom although the symbiote had a new host. The symbiote was controlling it's host, although it did not know the identity of the current Spider-Man assuming him to be Peter Parker. Sam battled and defeated Venom, suddenly the symbiote left it's current host and merged with Sam. The symbiote did not recognize Sam and Sam underwent a transformation, he didn't turn black but changed to red, due to Sam already having super abilities the symbiote's appearance was slightly altered, the creature was a "carnage" of what Sam and the symbiote had previously been....

Sometime after the venom symbiote was separated from Sam. He continued his career as Spider-Man. One day, while on patrol. Sam's Spider-Sense went into a frenzy and he returned home to see if all was well, but it wasn't. He saw Karn was attacking his father and Sam aided his father in battling Karn but the two were mortally wounded. But before being slain, Spider-Britain and Old Man Spider saved them. They were transported to the Spiders hideout and the two were informed of the Inheritors and their hunt for all the Spiders and how the Spiders must protect the Scion, the Bride, the Other and the Adolescence. The Spiders locate another Spider-team and they all begin to argue but they are then attacked by Daemos, Daemos is killed but he clones himself and returns with other Inheritors. The Spiders retreat and eventually they find out Silk has left. Before leaving, Sam and Peter say their goodbyes knowing one may not be returning, he watches as his father and other Spider-Men head through the portal while Sam stays with the other Spider-Man to deal with the Inheritors. In the ensuing battle, Sam manages to recall some of the Carnage symbiote left over from his previous experience wearing it and easily slaughters most of the Inheritors before regaining control. Escaping through a portal, Sam meets up with other Spider-Totems in order to participate in the final battle against the Inheritors. During the battle, however, Sam is overpowered and nearly killed by the Inheritor Maddox. However, Timothy Parker, the current Spider-Man of Earth-9022, arrives to kill Maddox in retribution of killing his family. Tim then unleashes his kaiju-powers upon the overconfident Inheritor, allowing Sam enough time to escape the grasp of Maddox and letting the two go at it in a bloody brawl.

After the Inheritors were defeated and banished to a backwater reality, Sam returned home. However, he was distraught over the discovery that his father was killed during the Spider-Verse event and decided to quit being Spider-Man for a time while focusing on helping his mother at home.

Warriors of the Great Web

When Timothy Parker, the Spider-Man of Earth-9022, was seemingly banished to the Multiverse whilst battling his telepathic brother Xenilla, Earth-1315 was the first universe he arrived on. Tim then began to search for Peter Parker in order to enlist his aid, instead finding Sam and Mary Jane in Forest Hills. After Tim explained the situation to Sam, who had seemed to understand the predicament, a news report came on which showed that Piranha Man was on a rampage across New York. Tim then rushed out after Sam refused to go and stop his old enemy. However, when Tim was on the verge of defeat due to Piranha Man's sheer tenacity and animalistic force, Sam re-donned his costume and went to help.

Due to his relatively short time as Spider-Man, Sam biggest weakness is his inexperience in being a costumed crime-fighter. He still is not completely sure what his powers make him capable of and this handicaps his effectiveness because of this.

Although he is very bright and seemingly mature for a 13 year-old, his age and lack of real world experiences is sometimes an obstacle in understanding the gravity of the situations around him. Miles has poor combat skills relying on his reflexes and as he his said himself: luck.

He has had no combat training beyond what he has learned from watching videos of Peter Parker in action and his own experimentation with his powers. This leads to him making tactical mistakes in fights, such as when he leaped into the center of a group of common thugs and was promptly floored with a punch to the face.

Transportation: Like his father, he can conduct his own webbing and uses it for transportation, unlike his father Sam's webs do not splatter everywhere and does not aquire a web shooting device to make them go into straight lines
Weapons: None

Retrieved from "https://marvelcomicsfanon.fandom.com/wiki/Samuel_Parker_(Earth-1315)?oldid=255547"
Community content is available under CC-BY-SA unless otherwise noted.